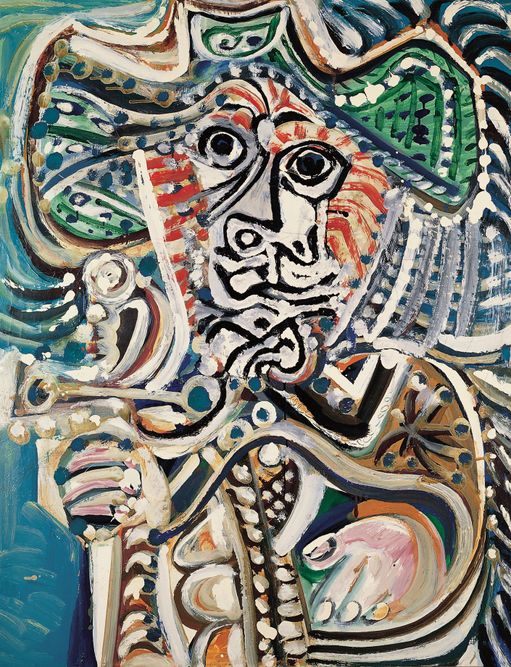 The chivalrous knights and children in Picasso’s late paintings seem to have stepped out of the pages of ancient romances and fairy tales. The artist worked with unprecedented freedom, simulating the decorative patterns of textiles and the artlessness of children’s drawings. But the complex interweaving of forms reveals the experience of eight decades of making art.

‘When visiting an exhibition of children’s drawings, some years later, he remarked: “When I was their age I could draw like Raphael, but it took me a lifetime to learn to draw like them.”

Portrait
Bust of a Man Insect 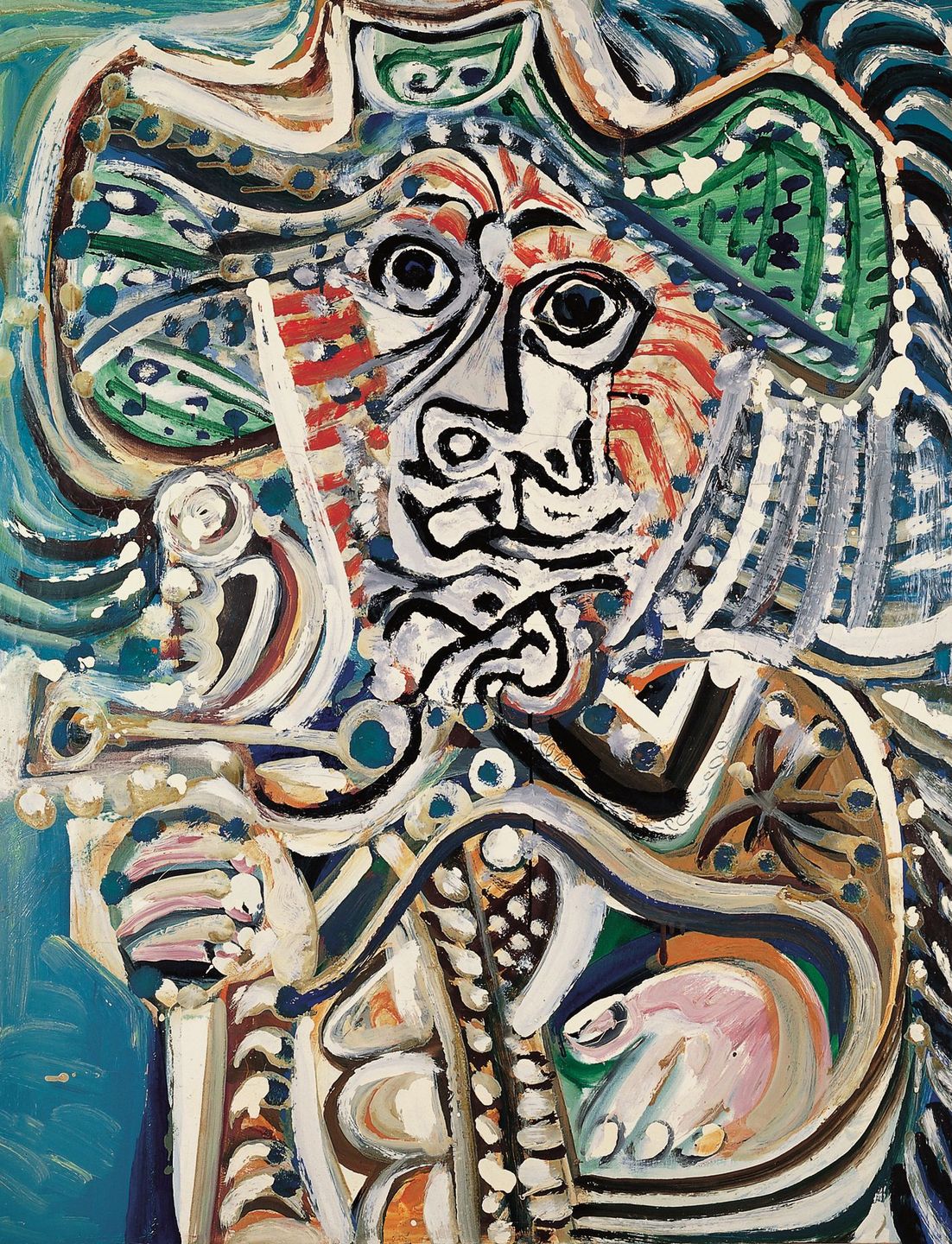 Musketeer with Sword was included in the last exhibition authorised by Picasso, held at the Palais des Papes in Avignon. As its curator, the artist selected the 200 works displayed, which he limited to his production between 1970 and 1972. Picasso died in April 1973 and the exhibition opened the following month, revealing an artist moving in a space of freedom – compositional, chromatic and thematic – possibly unparalleled at any other moment in his career. It was this very freedom in his final output which disconcerted some of Picasso’s critics.

Musketeer with Sword dates from 28 January 1972, a month in which the artist painted various musketeers brandishing swords, using different pictorial calligraphies. All these musketeers seem to have a certain biographical element that connects them, expressed through the eyes, a physical feature which Picasso generally emphasised, even in his most Baroque works such as this one. Here they are the unmistakable punctum, painted with the largest amount of black in the composition, the rest of which is expressed through a combination of brightly coloured long and short brushstrokes and dots. Picasso’s figures of this type have habitually been associated with Rembrandt – a reference point for the artist in his final years – whom Picasso admired for his astonishingly unflinching gaze on death. According to Jacqueline, Picasso ‘started to study Rembrandt during his illness’, but the issue is not in fact so simple, as some resonances fuse with others given that the influences on Picasso’s work are always multi-directional. In reality this portrait combines different iconographies, from the Spanish Golden Age to 19th-century bullfighters who overlap with the musketeers, so that paint brushes are replaced with daggers or swords, as in this canvas.

A plausible interpretative key to works such as this one lies in Picasso’s own texts, in which he hyperbolically evokes images of that swaggering 17th-century Spain of minor nobles and courtesans, a literary and sometimes surrealist equivalent of the figures in his aquatints for La Celestina. Rafael Alberti perceptively observed that the oils shown in Avignon ‘are figures from the Museo del Prado, from the ghostly Toledo of his early youth.’ It is not by chance that in his role as curator, Picasso essentially chose portraits – portraits of those extravagant figures wearing cavaliers’ hats and doublets with swords and pipes who had inhabited his personal cosmos since his youth. They would become the protagonists of his final grotesque parade in the papal palace in which literature, the history of art and autobiography came together in equal measure.