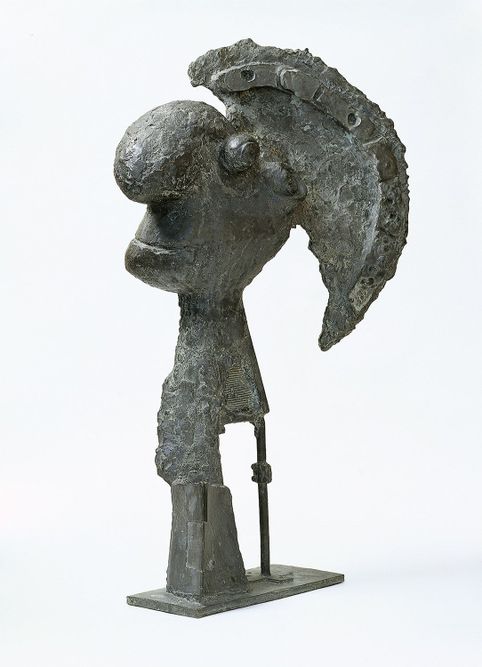 Head of a Warrior

In the 1930s, while close to Surrealist circles, Picasso cultivated a form of expression outside Freudian philosophy, dreams or irrationality. By making use of found objects, dignifying waste materials and manipulating domestic items, he managed to give his characters an unusual and even surprising nature. In Head of a Warrior, the eyes are modelled on tennis balls and the head is decorated with a classically styled helmet known as a hoplite, crowned with a crest.

‘I asked Pablo one day why he gave himself so much trouble to incorporate all these bits and pieces of junk into his sculptures rather than simply starting from scratch in whatever material – plaster, for example – he wanted to use and building up his forms in that. “There’s a good reason for doing it this way”, he told me. “The material itself, the form and texture of those pieces, often gives me the key to the whole sculpture […] it’s not that I need that ready-made element, but I achieve reality through the use of metaphor. My sculptures are plastic metaphors.”’ 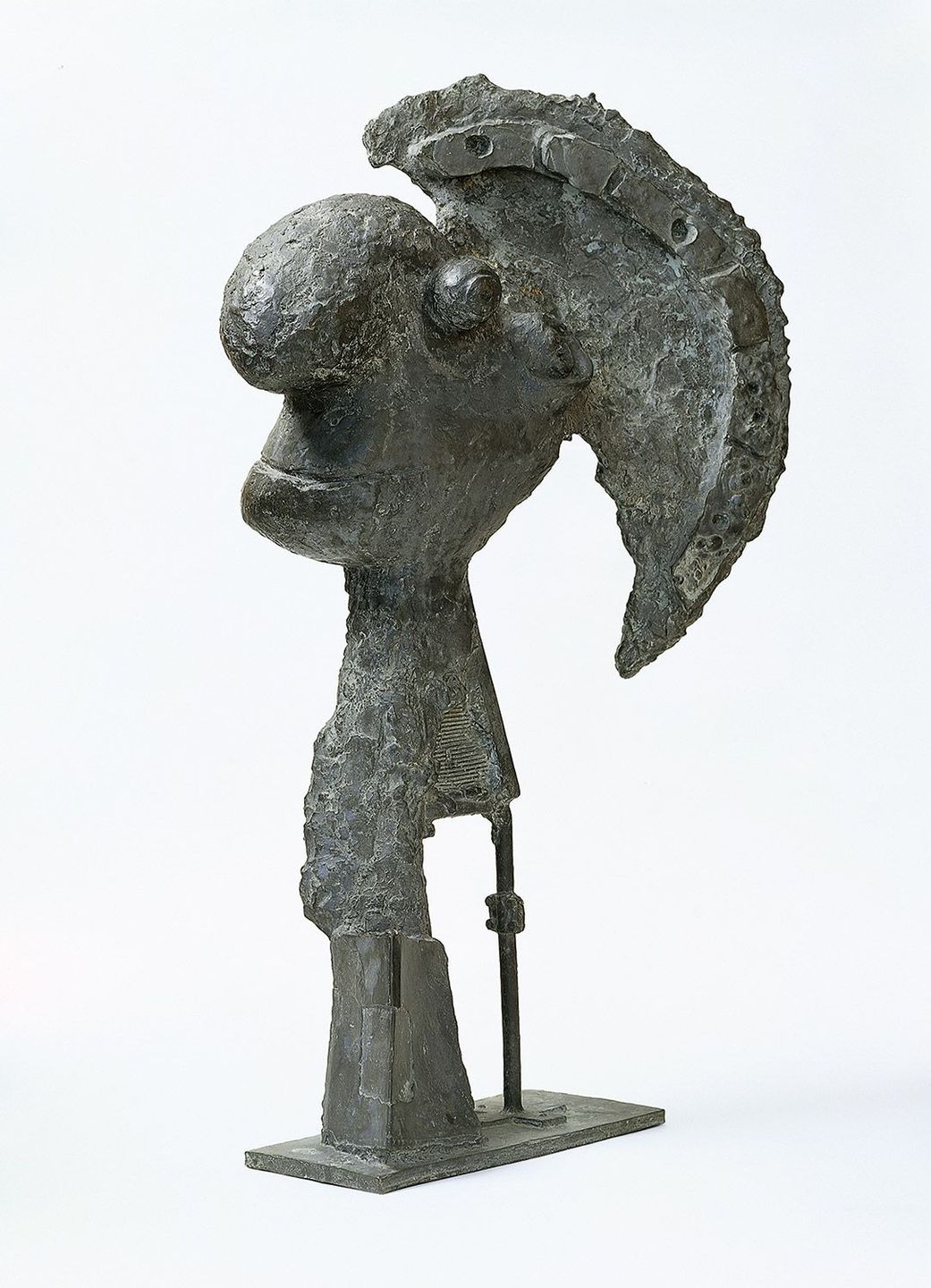 The iconography of Head of a Warrior springs from the project to illustrate Lysistrata, a play by Aristophanes translated into English by Gilbert Seldes for the Limited Editions Club in 1934. This Greek comedy, performed in the 5th century BC, describes the determination of Lysistrata who, to put an end to the Peloponnesian War, convinces the womenfolk to refuse to have sex with their husbands until they lay down their arms. To illustrate this new translation, Picasso created a set of drawings between December 1933 and February 1934 depicting the heroine and the warriors with an Ingresque precision similar to the etchings already made for Ovid’s Metamorphoses (1931). His interest in the figure of the Greek warrior was doubtless strengthened by the one Christian Zervos had in the subject within the context of his archaeological publications, notably in the first volume of L’Art grec, published in 1933 by Éditions des Cahiers d’art, which contains several reproductions of a Laconian bronze statuette of a warrior from the 7th century BC.

If the excessive deformation of the nose, the eyes in non-aligned sockets and the smiling mouth are a prolongation of the large sculpted heads of Marie-Thérèse, the irony which suffuses the Head of a Warrior breaks with the purity of the line drawings and probably illustrates the sexual frustration of the warrior constrained to bend to the will of the women and establish peace. The original sculpture combines the techniques of plaster modelling, assemblage and imprinting. In addition to the moulded elements, the artist incorporated and impressed in the fresh plaster different elements found in the vicinity of his studio. The eyes are modelled around tennis balls and a harrow with bolts constitutes the warrior’s plume, on which the chicken wire of a henhouse is impressed. The disproportionate, voluminous head mounted on a long, scrawny neck contains nails, a metal structure and a crowbar, and rests on an armature in wood and iron wire. One of the sides of the neck vibrates with the imprint of a piece of corrugated cardboard. A play of materials and textures that enriches the unique proof cast in bronze in 1943 by Émile Robecchi: the intentional contrast between the modelled and imprinted parts and the external additions showcase Head of a Warrior as one of the first and richest combinatory works in Picasso’s sculpted repertoire.