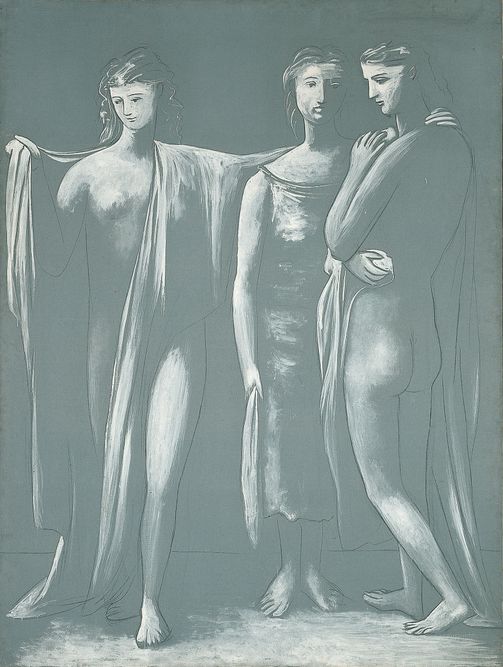 Oil and charcoal on canvas

Married to Olga Khokhlova, a beautiful Russian ballerina, and father to their child, Paulo, Picasso borrowed from Etruscan engravings and French Mannerism to create a slimmed-down, modern version of the classical figure. Anticipating Andy Warhol by four decades, he transformed family photographs into haunting compositions of decisive lines floating over a coloured haze.

‘Academic training in beauty is a sham. We have been deceived, but so well deceived that we can scarcely get back even a shadow of the truth. The beauties of the Parthenon, Venuses, Nymphs, Narcissi, are so many lies. Art is not the application of a canon of beauty but what the instinct and the brain can conceive beyond any canon.’

Portrait
Glass of AbsintheHead of a Warrior 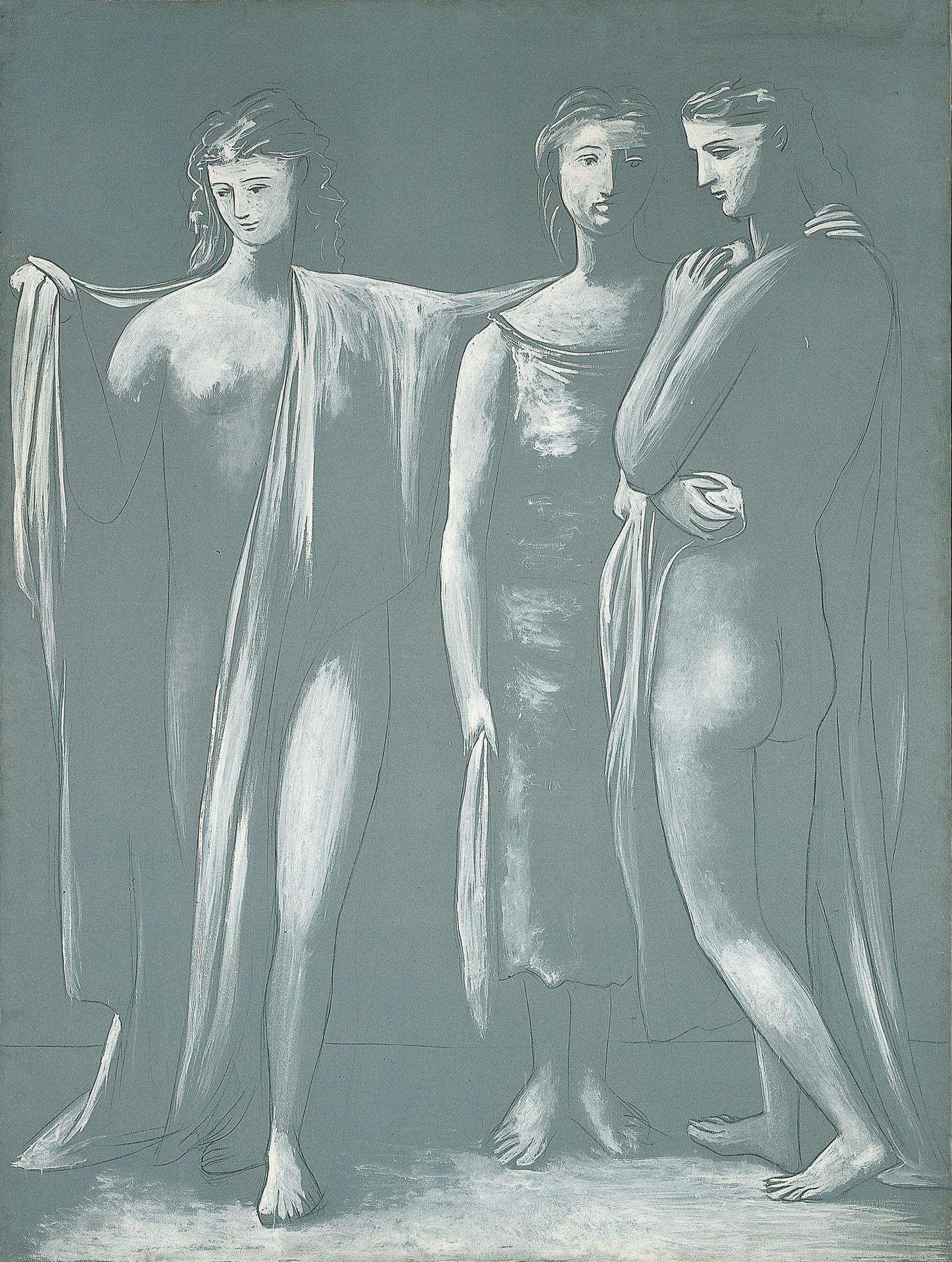 Within the remarkable corpus of bathers that Picasso created during the 1920s, three full-length interlaced figures stand out. The theme of the Three Graces reminds us of the painter’s predilection for tripartite compositions and his taste for the grand subjects of classical mythology. In 1923, while sojourning in Antibes, an ancient Greek town once known as Antipolis, Picasso became totally immersed in Hellenism and granted this subject matter unprecedented scale: painting his motif in grisaille on a large-format canvas, the artist adopted the ancient device of the three goddesses of Beauty, alternately presented frontally and from the back, naked and veiled. He delved into the antique citation via a subtle play of drapery which echoed the fashion of the day: that, for example, of Madeleine Vionnet, which the chic, cosmopolitan population of Cap d’Antibes took to wearing. In the company of the American painter Gerald Murphy and his wife Sara, the Picassos partook of the neo-Greek lifestyle, as the amateur snapshots taken on the unspoilt beach of La Garoupe show.

The absence of perspective and the wavy line which makes the bodies swell more than the faces is a reminder of the technique of trompe-l’œil: vacationing in the town of Fontainebleau two summers before, Picasso probably retained the memory of the Three Graces painted by Primaticcio in the ballroom of the chateau, as well as some adjoining paintings in grisaille. According to John Richardson, Picasso’s painting would have been initially conceived to decorate the music room of Count Étienne de Beaumont, present with his wife at Cap d’Antibes that same summer. In the spirit of the Three Graces transposed in blue ink onto the walls of La Mimoseraie in 1918, the commission, if indeed it took place, was appropriated by the artist and turned into the subject of a magisterial, autonomous development. Announced by a set of pen-and-ink drawings, and accompanied by engravings on copper or zinc in which the figures observe one another and dance on the sheet of paper, the painting fixes them in a static pose: the dialogue between the figures seems to have been interrupted, their attitudes are serious. A thick charcoal line isolates the shapes, which stand out on a canvas primed in grey: the neutral, uniform background, heightened with thin layers of white paint, dramatises the scene, which has the appearance of a ‘nocturnal theatre’; a Baudelairean concept at the origins of modern poetry, located somewhere between real and imaginary. Although we might recognise Olga’s features in the face of the central figure and, for her confederates, those, perhaps, of Sara Murphy and the Countess of Beaumont, the trio is but little individualised and provides Picasso with the opportunity to inflect the anatomies on the basis of one and the same figure.

The Ingresque naturalism of the bodies breaks with the synthetic outline of the feet which punctuate the bottom part of the composition and above all of the hands which clasp each other: heavy with meaning, the hands are a symbol, here, of gentleness and protection, formal elements in which the emotion of the painting is concentrated and indices of a future stylistic change: that of the early metamorphoses. As Picasso told Marius de Zayas in 1923: ‘Repeatedly I am asked to explain how any painting evolved. To me there is no past or future in art. If a work of art cannot always live in the present it must not be considered at all. The art of the Greeks, of the Egyptians, of the great painters who lived in other times, is not an art of the past; perhaps it is more alive today than it ever was.’ A comment that a view of the studio published in the June 1926 issue of Cahiers d’art, in which the Three Graces majestically dominates over the artist’s production of the last three years, sheds ample light on.