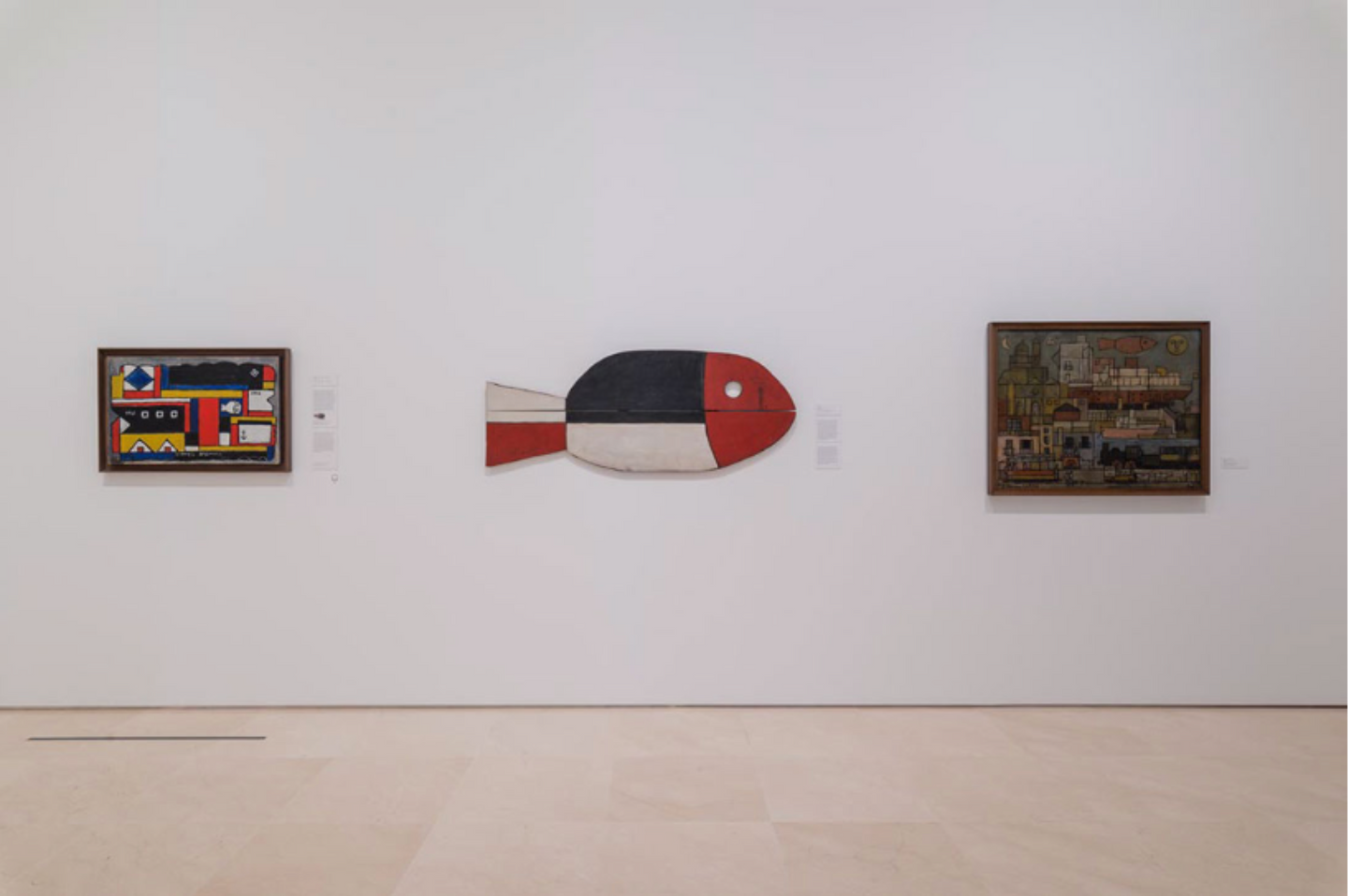 Joaquín Torres-García (Uruguay, 1874-1949), like Pablo Picasso, had the courage to experiment constantly and he left a vast body of work in a wide range of media: paintings, sculptures, drawings, books, toys, frescoes, murals and monuments. Museo Picasso Málaga presented a major retrospective featuring 170 works by an artist who claimed that “our North is the South”.

The exhibition at Museo Picasso Málaga included unpublished correspondence between Torres-García and Picasso concerning a project that ultimately never saw the light of day. The two artists coincided in Barcelona and again, later on, in Paris. This was the first time MPM hold a monographic retrospective of a Latin American avant-garde artist.

This major retrospective of Joaquín Torres-García covered his production dating from his earliest works in late 19th-century Barcelona - where he became one of the most recognized painters of the Noucentisme movement – up to his late works, produced in Montevideo in the 1940s. The exhibition combines a chronological and thematic look at his production, with emphasis on two key moments. The first of these was from 1923 to 1933, when Torres-García took part in the European avant-garde movements; and the second, from 1935 to 1943 when he returned to Montevideo to work intensively on his own personal interpretation of abstract art, announcing the materialization of a universal art.

Joaquín Torres-García was one of the most complex artists of the first half of the 20th century. He opened up new pathways for modern art, and possessed a radical individuality that defies classification or stereotype. His work is significant because it combined the theories of the European avant-garde movements with the art forms of Pre-Columbian cultures and he called this Constructive Universalism. Torres-García remained loyal to a perception of time as a collision between different periods, rather than a linear progression. He was also unique in combining high culture with artisan craft or industrial manufacturing; we were able to admire his transformable toys at the Museo Picasso Málaga 2010 exhibition, Toys of the Avant-Garde. He was also a great thinker and teacher who developed his own an art theory, which he disseminated in his writings, lectures, workshops and teaching.

Torres-García was born in Montevideo in 1874. His mother was Uruguayan and his father Spanish. In 1891, when he was 17, the family moved back to his father’s birthplace, Catalonia. These were the early years of Modernism in Barcelona, and the young artist coincided with Joaquim Mir, Isidre Nonell, Joaquim Sunyer, Pablo Picasso, Josep Maria Sert, and the brothers Joan and Julio González. In Barcelona his painting became inspired by the Neoclassical style that crystallized into what Eugeni d’Ors named Noucentisme, a Catalan art movement that harked back to the classical and humanist traditions of Mediterranean culture, in particular the forms and ideas of Ancient Greece, which typically expressed yearning for a lost Arcadia. The Greek influence is evident in the architecture of Mon Repòs, the house that Torres-García later built in Tarrasa, and in the murals that he painted in its rooms.

In the early years of the 20th century, he gave lessons at Mont d’Or, a progressive school in Barcelona, and he collaborated with the Catalan architect Antoni Gaudí on stained glass windows for the church of La Sagrada Familia. According to Torres-García, in his book Historia de mi vida (Story of my Life), Gaudí did not appreciate him as an artist and advised him to devote himself to teaching. In 1910, Torres-García was officially commissioned to paint the panels for the Uruguayan Pavilion at the World Exhibition in Brussels. From 1918 onwards, he began to experience the influence of the avant-garde movements and to meet innovative painters such as Uruguayan artist Rafael Barradas, Robert Delaunay, Piet Mondrian and Theo Van Doesburg, among others. Considered one of the most significant painters of early 20th-century Barcelona, between 1912 and 1918 he devoted himself to what was to be his most representative work: the set of frescoes for the Saló Sant Jordi in the medieval Palau de la Generalitat, which at that time was the headquarters of the Presidency of the Mancomunitat de Catalunya, or Commonwealth of Catalonia. The commission was revoked by the then President of the institution, the architect Josep Puig i Cadafalch, and the murals were painted over in 1925.

With the growing political tension in Spain at the end of the First World War, in 1920, at the age of 46, Torres-García moved to New York with his wife and children. He was fascinated by the city’s modernity and began to mass-produce wooden toys under the trade name Aladdin Toys. He had come up with the idea for these in Barcelona, and they explored the concept of transformable structures. Although in New York he became acquainted with modern artists and showed and sold his own work, financial difficulties led him to move back to Europe with his family in 1922, where they lived in a number of locations in Italy and France before settling in Paris in 1926.

In 1930 in Paris, alongside the art critic Michel Seuphor, Torres-García founded the Cercle et Carré group with which he organized organizing one of the most important art exhibitions of the time, at Galerie 23. The movement was joined by leading abstract and constructivist artists such as Piet Mondrian, Sophie Tauber-Arp, Fernand Léger, Jean Arp and Georges Vantongerloo. But the pure geometric abstract style did not satisfy Torres-García, and he was coming to terms with his own artistic concept, Constructive Universalism, according to which art is constructed based upon a structure, with signs and symbols reflecting a universal order. His determination to pursue this path, along with the market crisis that was already affecting modern art in the 1930s, drove him to leave Paris in and settle in Madrid for a year, before leaving for Uruguay at the age of 60.

In 1934, Torres-García returned to Montevideo, where he lived until his death in 1949 and became a prominent cultural and academic figure, leaving a lasting imprint on Latin American art. Upon his return, he tirelessly pursued his own form of artistic expression, while also giving classes and writing numerous texts that examined his concept of art.

He created the Asociación de Arte Constructivo (Association of Constructive Art), in which he explored Pre-Columbian art, highlighted the affinities between this tradition and avant-garde Constructivism, and considered American native cultures and modern European cultures to be on an equal aesthetic, artistic and theoretical level. The association led the establishment of the Torres-García Workshop. It was a place for reflecting on the function of constructivist and abstract art as regards the creation of American art and was intended as a creative laboratory using both traditional and modern techniques and materials. In the same spirit, he also created one of the most iconic images in Latin American modern art: an inverted map of South America, illustrating the notion of the South as its own North. The members of the workshop shared a belief in the artists’ social responsibility. These young artists produced paintings, sculptures, woodwork, ironwork, furniture, murals, textiles and architectural projects.

The last ten years of Torres-García’s work featured a notable return to colour, and a fresh interest in monumental public works. The exhibition concludes with his late works, bringing his complete body of work full circle and summarizing his contribution to modern art. For the curator of the retrospective, Luis Pérez-Oramas, the artist worked on the idea of art as “a language whose universality would be grounded in a crude schematic representation” and “contradictory time periods, condensing the archaic and the modern”. His work has fascinated generations of artists on either side of the Atlantic, especially in the Americas, earning him this fresh critical appraisal in the context of Western art history.

Joaquín Torres-García and Pablo Picasso coincided in Barcelona, a city they both came to at a very young age. At different times, they were both pupils of the Official School of Fine Arts of Barcelona, better known as La Llotja. They met for the first time in 1896, in a group exhibition where the 22-year old Uruguayan was showing four water colours, and Picasso, aged just 15, exhibited his oil painting First Communion. They both rapidly became prominent members of the city’s artistic circles and must have met and talked, either in cafés such as Els Quatre Gats, or at Sastrería Benet Soler, a tailor shop that made suits for artists who needed them, in exchange for paintings. Publications of the period, such as Pèl & Ploma or Eugeni D’Ors’ Almanach dels noucentistes, published articles by both artists, as well as reviews of their work. Their paths separated in 1904, when Picasso moved permanently to Paris.

Picasso’s visit to Barcelona in 1917 on the occasion of the performance of the ballet Parade, for which he had designed the costumes and scenography, confirmed Torres-García in his opinion of the artist. Fascinated, he described Picasso’s work as the long-awaited arrival of “real art” in the city. Although their personal relationship was not a continuous one, Torres-García visited and coincided with him from time to time in Paris, and even began to write a book on him, with the title Picasso, Seen by a Painter. The two gradually became distant, which put an end to this project from which only the book cover remains, in Montevideo. As he explained in his memoirs, Torres-García “threw the book into the fire, and thus lost a good contract with a publisher”. A display case in the MPM exhibition contained a picture of the book cover, along with a number of letters held in the archives of the Musée National Picasso Paris that are part of the unpublished correspondence between Torres-García and Picasso about the project that never saw the light of day.

A Day with Torres-Garcia

Our North is the South

A journey through the life and work of the artist