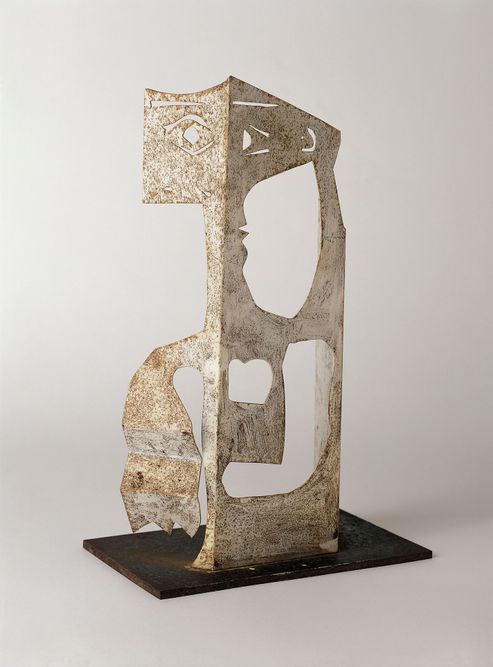 During the war years, Picasso painted a series of horizontal nudes as grim and motionless as corpses. His postwar reclining nudes came back to life, unfolding like the fields and hills of a landscape, while his vertical sheet metal sculptures invite the viewer’s eyes to caress their surfaces and crevices.

‘“Art is never chaste”, Picasso said to me one day. “Ignorant, innocent people should not be allowed to look at it; those who are insufficiently prepared should not encounter it. Yes, art is dangerous. Or, if it is chaste, it is not art.”’ 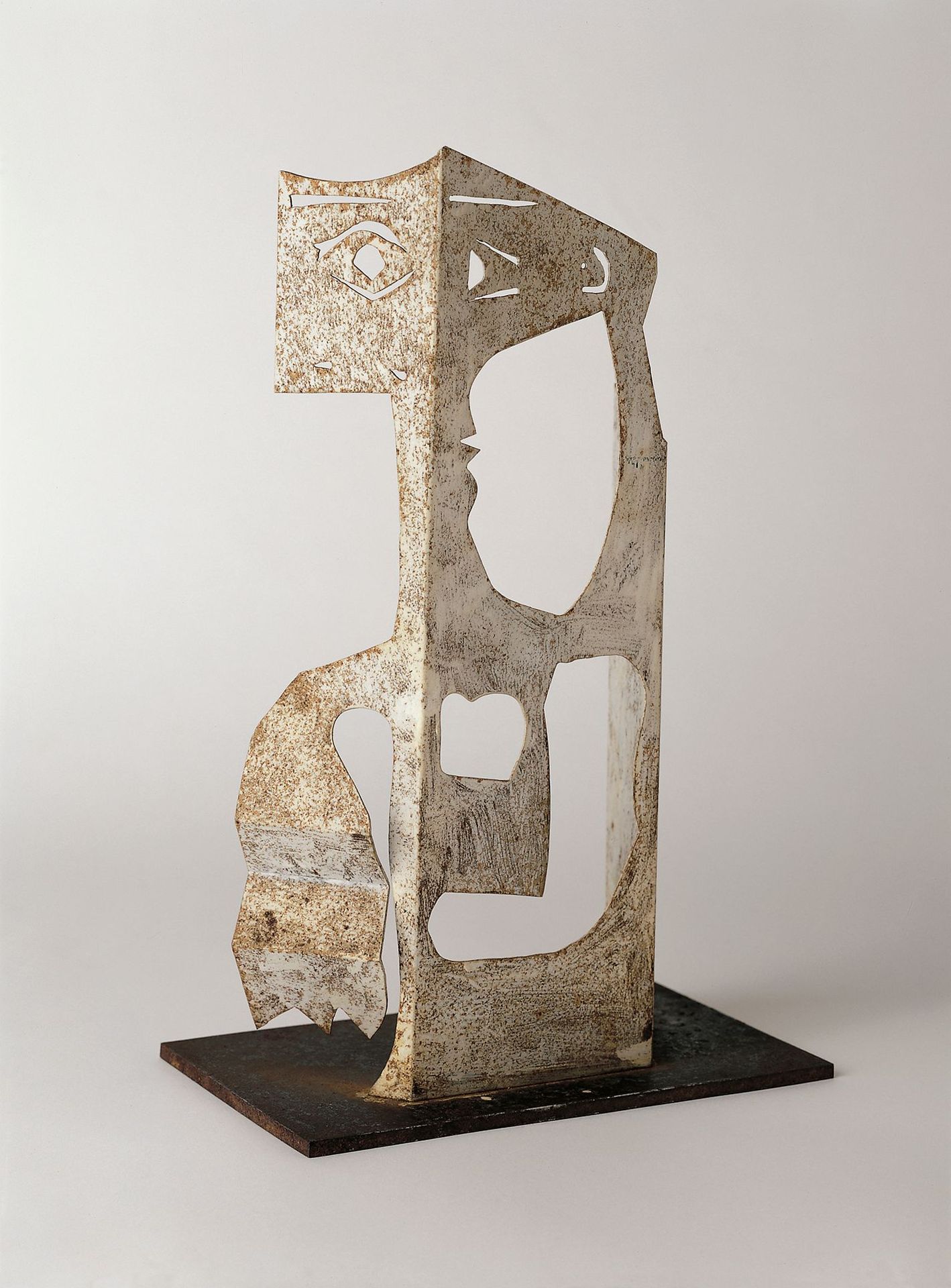 With a folded, dangling arm and cutout features, this representation of Jacqueline Roque (1927–1986), the artist’s second and last wife, is known in three other versions. One example, made of paper, enabled Picasso to decide how and where to bend or ‘crease’ the metal and allowed him to experiment with the size and the placement of the open-work areas.

The figure of Jacqueline occupies two ‘sections’ of a metal sheet that has been folded into three panels. One panel is solid and has not been worked, serving as a structural support and augmenting the perceived depth of the body. The model’s features have been sliced out of the metal: eyebrows, eyes, ears, mouth and cheeks, a breast and an arm. With the exception of the right arm, hanging from the figure’s centreline, these forms are expressed by hollowed, absent spaces. Viewed from various angles, the sculpture’s flat-metal sections assume volume. Occupying and appropriating these empty spaces into itself, the body acquires depth and mass.

Metal cutout sculptures of this type were part of Picasso’s production in the 1960s. The first example was a large bird of prey […]. In general, these metalworks recalled the paper cutouts Picasso had made in the early 1940s during the Second World War and the primitive silhouettes, especially those of paper animals and figures that he had made as a child. According to Lionel Prejger, Picasso invented this type of sculpture as a means of giving ‘permanent shape’ to the paper cutouts he had accumulated over time and, nonetheless, became so inspired by the process that he began to ‘cut out new paper shapes every day, in such quantity that it was hard to keep up with him’ (Prejger cited in McCully 1997, p. 259). […] It has also been suggested that the artist’s work in metal developed simultaneously from the metal toys he created for his own children.

Picasso’s collaboration in the 1960s with the Norwegian sculptor Carl Nesjar (who had discovered a special cement that could cover large flat surfaces) resulted in a number of important public commissions of colossal cement sculpture, some based on this type of construction of cutout and folded forms.

This cutout sculpture of Jacqueline was made in Cannes in 1961, the year she and Picasso married.