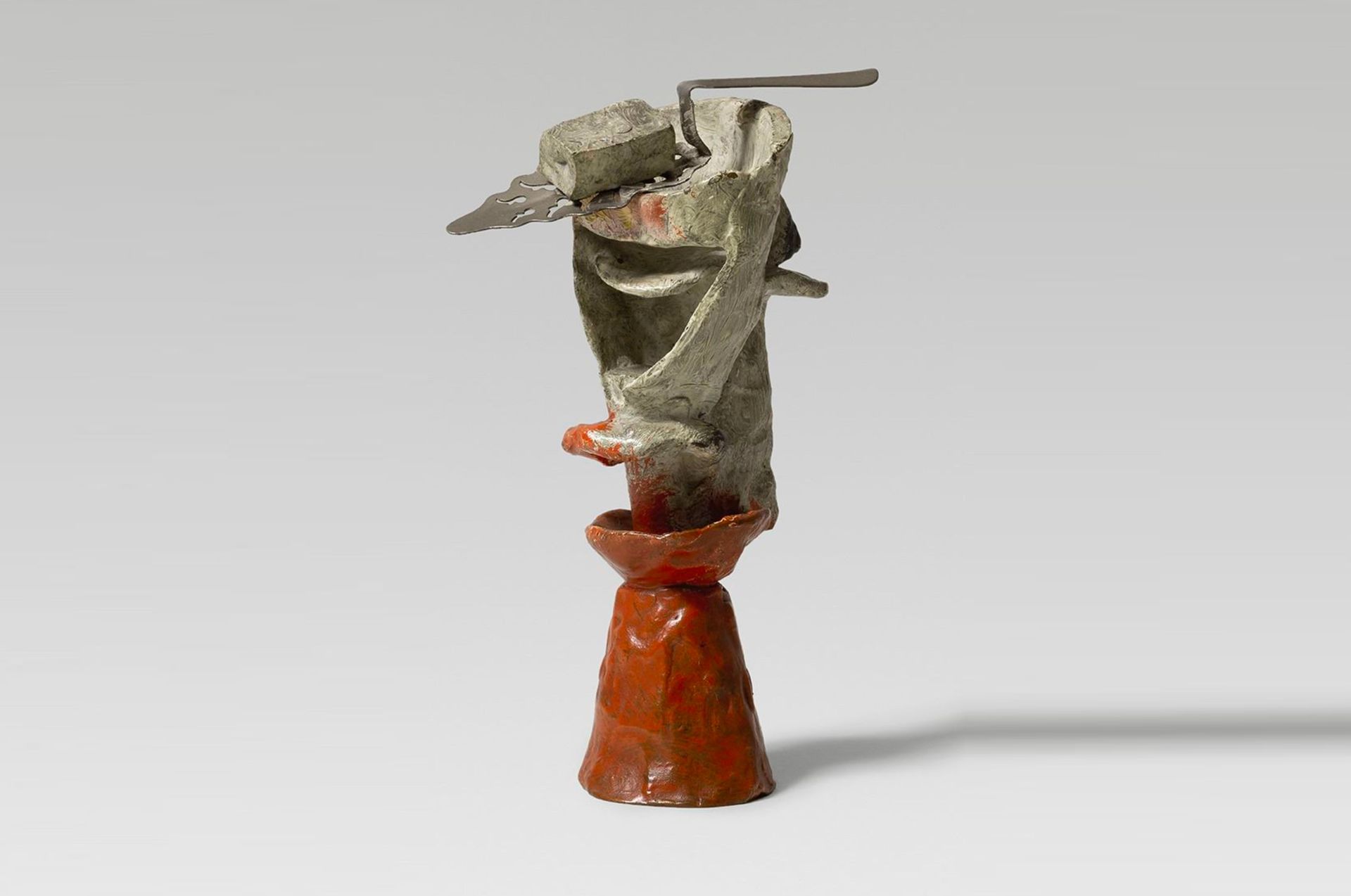 THE STORY OF A GLASS OF ABSINTHE

The little cubist sculpture Glass of Absinthe (1914), shows the typical conical glass, spoon and sugar cube associated with the drink, which was very popular in Paris’s bohemian circles. In collaboration with his art dealer, Daniel-Henry Kahnweiler, Picasso made six versions of this sculpture, each decorated differently so that it became a unique object. This is the example that Picasso kept for himself and that Brassaï photographed when he visited the artist at home.

In the spring of 1914, Pablo Picasso made a series of six bronzes depicting an absinthe glass. Cast from the same wax maquette, they are identical in shape but each bronze is painted differently. These six versions of the Glass of Absinthe are perhaps the most interesting example of Picasso’s cubist polychrome sculpture. In his Cubist paintings, Picasso often used different colours to create variations on the same underlying composition. However, this was the first time he created a series of variations in the medium of sculpture. Each of the six bronzes is a unique work, with different areas highlighted by colour, pattern and texture.

Absinthe, or La Fée verte (the Green Fairy), was a favourite drink in bohemian Paris. Flavoured with wormwood and other herbs, it was believed to cause hallucinations, mental disorders and even death among those who drank it assiduously. Artists such as Édouard Manet, Edgar Degas, Henri de Toulouse-Lautrec and Picasso himself frequently depicted drinkers numbed by its effects. Absinthe’s danger only made it more alluring. There was heated public debate regarding its toxicity and, a year after Picasso made these six small sculptures, it was banned by the government, both in France and in its colonies. (Modern science suggests that the only dangerous element of absinthe is its high alcohol content.)

Drinking absinthe required an elaborate ritual. A small amount of the bitter spirit was served in a tall conical goblet. The drinker placed a flat, delicately pierced spoon on the rim of the glass, with a cube of sugar perched on the spoon, and then poured water through the sugar into the absinthe, diluting and sweetening it. As if by magic, the absinthe turned from clear to a sinister, milky green.  An 1887 painting by Vincent Van Gogh shows a glowing green glass of absinthe next to a sparkling carafe of water.

From 1910 onwards, the glass was one of the favourite, and most frequent, subjects of the cubists’ pictorial experiments. Daniel-Henry Kahnweiler, the cubists’ dealer and the first important interpreter of their work, wrote that the great revolution of 1910 cubism was the breaking open of the closed form. A transparent glass, simultaneously open and closed, was thus an ideal subject for cubism. Picasso’s cardboard and metal Guitars of 1912 and 1914 showed how the idea of open form could be applied to an opaque object. In spring 1914, he also made a series of painted reliefs using bent sheets of tin to represent the bowls of wineglasses.

The bronze Glass of Absinthe is radically different from these contemporary works. The heavy, noble metal reasserts the idea of sculptural solidity. It is shocking, therefore, when Picasso cuts open the bowl of the glass to reveal a metal disk representing the surface of the liquid contained within it. As the poet Guillaume Apollinaire wrote in 1912, “Picasso studies an object the way a surgeon dissects a corpse.”  Thick horizontal flanges materialize the cubist grid of his drawings and paintings.