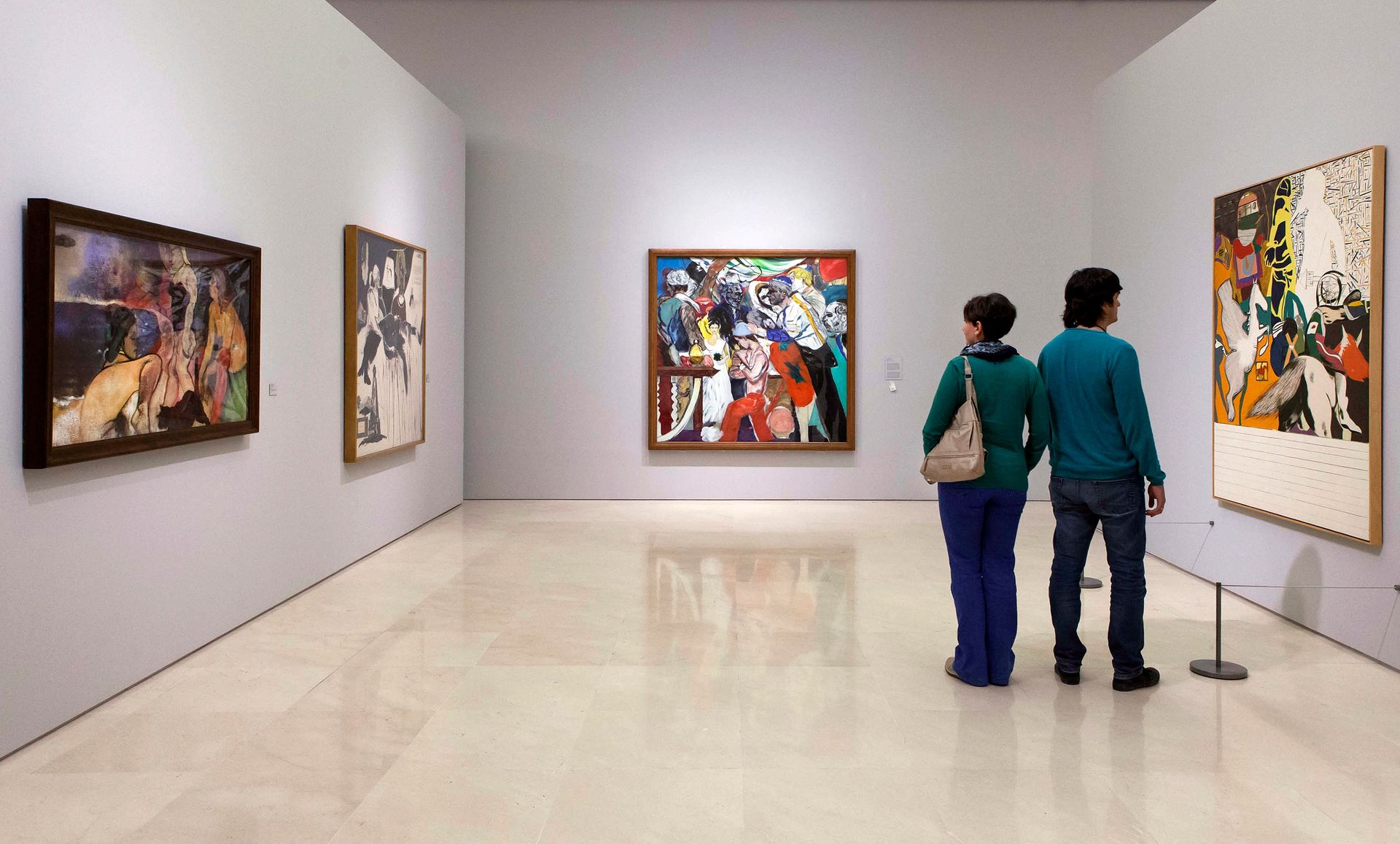 From 26 April to 17 September 2017, Museo Picasso Málaga is presenting the work of leading painters who, since World War II and up to the present day, have worked in London, a city of artistic and personal encounters where they depicted the human figure, landscape and everyday reality through a distinctive and personal vision.

Based on a markedly personal pictorial approach to the depiction of the human condition in its intimate, everyday moments and encounters, their work emerged at a time when American art was enjoying a period of strength in contrast to a debilitated Europe in the process of reconstruction.

Elena Crippa, an expert on Modern British Art, has curated this exhibition, organised by Tate London with the collaboration of Museo Picasso Málaga and the sponsorship of CaixaBank. A remarkable selection of key works from the Tate will be shown together for the first time in this exhibition.

In the 1950s a small group of painters who shared the same artistic concerns and were connected by ties of friendship and mutual admiration explored the appearance and vulnerability of the body, with the city of London as their surrounding context. Through the depiction of the figure and their own everyday landscape, these artists conveyed the delicacy and vitality of the human condition while simultaneously developing new approaches and styles, reinventing their manner of representing life with pronounced individuality and imbuing painting with a rare intensity.

While most of the artists achieved critical recognition from the outset, public recognition was slower to arrive, primarily because art centred on the human figure was underestimated from the 1960s to the 1980s, years when abstraction and conceptual art were the prevailing forms of artistic expression. As the exhibition’s curator Elena Crippa has observed, for many years the work of these painters seemed to clash overtly with the artistic discourse of the time, but over the past few decades it has been reassessed and has now been located in a central position that allows for a “richer and more complex understanding of the art and culture of the post-war period.”

London, a city of artistic and personal encounters

After World War II, London assumed the position of Europe’s moral capital. The United Kingdom, which was not invaded in the war, played a strategic role at the end of the conflict and had welcomed refugees of all nationalities fleeing the Nazi regime. At the same time, continental Europe was recovering from invasion and destruction. It was in the British capital that this group of artists coincided, socialised and exhibited, rigorously evolving their own styles and existential positions but with the common denominator of favouring figuration over the prevailing abstraction. Through a markedly personal pictorial approach to the depiction of the human condition in its intimate life moments and encounters, their work emerged at a time when American art was enjoying a period of strength in contrast to a debilitated Europe in the process of reconstruction.

These painters, who knew each other and socialised in pubs in the Soho district of London, essentially painted people from their immediate circle such as the friends, relatives and lovers who were present in their daily lives. With Auerbach, Bomberg, Freud, Coldstream, Kossoff and Uglow, painting generally arose from a direct encounter with the motif to be depicted, frequently involving numerous sittings over a period of months or even years. In contrast, Andrews, Kitaj, Rego and above all Bacon tended to represent reality from the starting point of previously reproduced images, either in the form of photographs, films, books, magazines and newspapers or other works of art. In addition to depicting the human body these artists frequently focused their gaze on the landscape around them, specifically the streets of London where they lived. The urban landscape of a city that was being rebuilt after considerable wartime bombing offered a stimulating subject for these young painters, who continued to depict it on their canvases during the long years of reconstruction in the 1950s and 1960s. Some also turned their attention in an occasional or systematic way to their immediate environment: their studio or less familiar landscapes encountered on their travels.

This exhibition, to be shown at Museo Picasso Málaga until 17 September 2017, brings together Francis Bacon’s powerful solitude, Lucian Freud’s carnal angst, Michael Andrews’ encapsulated ego, Frank Auerbach’s three-dimensional painting, David Bomberg’s emotional force, William Coldstream’s rigorous measure, Ronald B. Kitaj’s multiplicity, Leon Kossoff’s visceral quality, Paula Rego’s subversion and Euan Uglow’s proportion, all of them artists associated with what has come to be referred to as the School of London, a label that has not, however, been accepted by art historians or by the artists themselves.

In conjunction with the exhibition, Museo Picasso Málaga is publishing The School of London, which features texts by its curator Elena Crippa and by art historian Catherine Lampert. This hardback book has large-format illustrations and three fold-out triptychs in addition to photographs and biographies of the ten artists represented in the exhibition. In addition, all visitors will be given a 20-page bilingual brochure (Spanish-English) covering the different sections in the exhibition.

Bacon, Freud and the School of London brings together outstanding examples of works depicting posed models. This provides the theme for the latest workshop organised by Museo Picasso Málaga: Laid bare: life drawings, which will take place over four sessions on 1, 2, 8 and 9 June in collaboration with the Museo de Málaga. Led by the Museo Picasso Málaga’s team, participants will be working with different techniques so prior knowledge of drawing is required.

Leading experts will be giving a series of lectures, starting on 8 June with Catherine Lampert, art historian and author of important biographies on a number of the artists represented in the exhibition. The series continues on 15 June with Elena Crippa, the exhibition’s curator and a curator in the department of modern British art at the Tate.

During the months that Bacon, Freud and the School of London is on display the museum will be showing various documentaries that offer accounts and interviews by artists present in the exhibition and by people who knew them. Prior to each film showing there will be a guided tour of the exhibition before moving into the museum’s garden where films to be shown include Francis Bacon directed by David Hinton (1988), and Frank Auerbach: To the Studio by Hannah Rothschild (2010). Original versions with subtitles.

Taking place this September in collaboration with the Universidad Internacional de Andalucía (UNIA) is the course The Artist’s Studio. 21st-century Laboratories. Various artists will discuss their working spaces in the context of the present day, when the concept of the artist’s atelier has been modified by the ubiquity of the new technologies and the emergence of urban art.

The museum will also be holding special days devoted to the exhibition. The first of them, A Day with Bacon, Freud and the School of London, will take place on Saturday 6 May, comprising a day of activities for children, families and adults.

The exhibition will also be the central theme of the Talks in the Museum that take place every Saturday at 12 noon. All you need to do to take part is register at the Ticket Desk as these talks are free with the purchase of an entry ticket. The complete programme can be consulted on the museum’s website, along with all the other activities in this programme, including workshops and activity books for children.

This exhibition is organised by Tate London with the collaboration of Museo Picasso Málaga and the sponsorship of CaixaBank.