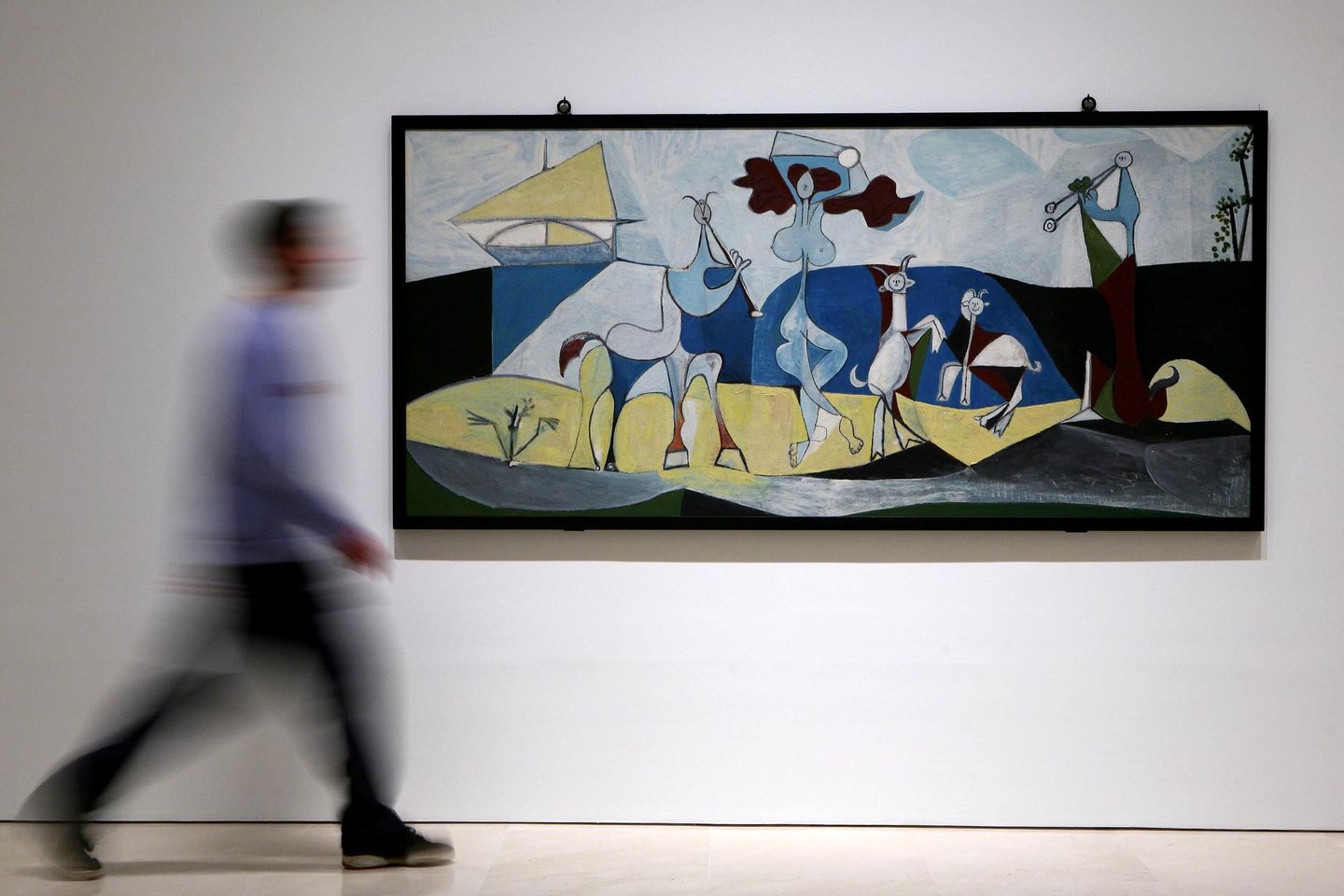 The Picassos from Antibes

The exhibition brougth together most of the works by Picasso in the Musée Picasso, Antibes, many of them never before shown outside the museum. These included the murals La Joie de vivre (1946), The Sea Urchin eater (1946) and the impressive sculpture Head of Woman with Chignon (1932). In all, 73 works, featuring paintings, drawings, sculptures and ceramics that serve to illustrate a splendid period in Picasso's artistic career. The Picassos from Antibes was organized by the Musée Picasso, Antibes; the Museo Picasso Málaga; and the Museu Picasso, Barcelona, with the collaboration of the Sociedad Estatal de Conmemoraciones Culturales.

When in the summer of 1946, on a beach on the Côte d’Azur,Picasso received the offer to use one of the great rooms in the Château Grimaldi in Antibes as a studio, he exclaimed enthusiastically: "I'm not only going to paint, I'll decorate the museum too". The invitation was given by Romuald Dor de la Souchère, curator of what was then the Musée d’Antibes, who arranged the large room on the second floor of the castle for Picasso to use as his studio, providing everything he thought the artist might need: easels, tables, paints, brushes, even a mattress for him to rest on.

And so began what Picasso himself referred to as an “adventure”, and which resulted in a series of paintings and drawings on unusual supports due, in part, to the shortage of materials after the Second World War. However this may be, these pieces perfectly reflected the jubilant spirit, the joie de vivre, which reigned in the recently liberated country. Picasso later added sculptures, graphic works and ceramics to this collection, forming the basis for what would be France’s first museum dedicated to him, inaugurated in 1966 as Musée Picasso, Antibes.

The works reflect Picasso’s return to the Mediterranean of his youth. As Dor de la Souchère says: “Antibes, in the Western Mediterranean, was the first Greek colony to the east. It is situated along a sea route known in the 16th century as “the route of the islands”, and whose last port of call is Malaga, the last Greek colony in the west”.

For Picasso’s work, this return also saw him coming back to nature and ancient myth, filling his paintings with fauns, satyrs and centaurs. Similarly, the fruits of the land and the sea and animals (water melons, sea urchins and goats) are present in his compositions, along with the female forms that so exercised Picasso’s fascination throughout his life.

Forms and Materials
As Picasso himself would say, in these works the white light of Antibes causes an exaltation of form, relegating colour to a secondary place. As a result, they feature constructions notably marked by geometry, exploring volume and seeming to stretch beyond the limits of the picture. At times, the feelings evoked by this search for symmetry and purity of line call to mind the stony architecture of the Château Grimaldi itself.

Picasso used a diverse range of materials during this period, as he sought to take advantage of what lay around him whilst being well aware of the danger the proximity of the sea represented for the conservation of his work. Many of these pieces are supported on such resistant surfaces as plywood and wallboard, the materials also include Ripolin. The Ripolin is an industrial paint that Picasso had already used in the 1930s and it was not recommended for canvas. However, this did not deter him from using it to paint several small still lifes and portraits with it. Indeed, the humid atmosphere and the fact that the surface dried before the background combined to create folds in the canvas that the master found most interesting.

Photographs by Michel Sima
The exhibition included a selection of photographs by the Polish artist Michel Smajewski, better known as Michel Sima. Taken whilst the Malagan artist was working in Antibes, these photographs provided an artistic and historical complement to the exhibition, portraying the context in which Picasso created the works that form the collection of the Musée Picasso, Antibes.

Michel Sima (Poland, 1912-France, 1987) moved to Paris in 1929, attracted by the exciting artistic life of the French capital. There he made many friends, including the Russian sculptor Ossip Zadkine, with whom he worked in 1934, and Picasso himself.

Imprisoned at Auschwitz concentration camp during the Second World War, just after his release, in 1946, Sima moved to the South of France. While there, he suggested a meeting on the beach between Picasso and Dor de la Souchère, who invited the artist to use part of the Château Grimaldi as his studio.

Catalogue and Curators
The bilingual catalogue produced for the occasion included texts in English and Spanish by the director and chief curator of the Musée Picasso, Antibes, Jean-Louis Andral, and the former curator of the Museum d’Antibes, Romuald Dor de la Souchère, conserved in the archives of the Musée Picasso, Antibes. The edition also contained fully documented colour reproductions of all the works included in this exhibition.

The Picassos from Antibes was organized by the Musée Picasso, Antibes; the Museo Picasso Málaga; and the Museu Picasso, Barcelona, with the collaboration of the Sociedad Estatal de Conmemoraciones Culturales.

The Picassos from Antibes was also the central theme of the so-called Charlas en el Museo, free lectures given by the Education Department every Thursday at 6.00 p.m., and of school visits to the museum until 11 June. Finally, the film Picasso: joie de vivre, directed by Jacques Berthier in 1946, was shown in the MPM Projection Room over the exhibition period. This twelve-minute film shows Picasso working in the medieval castle at Antibes.

Picasso at the Château Grimaldi 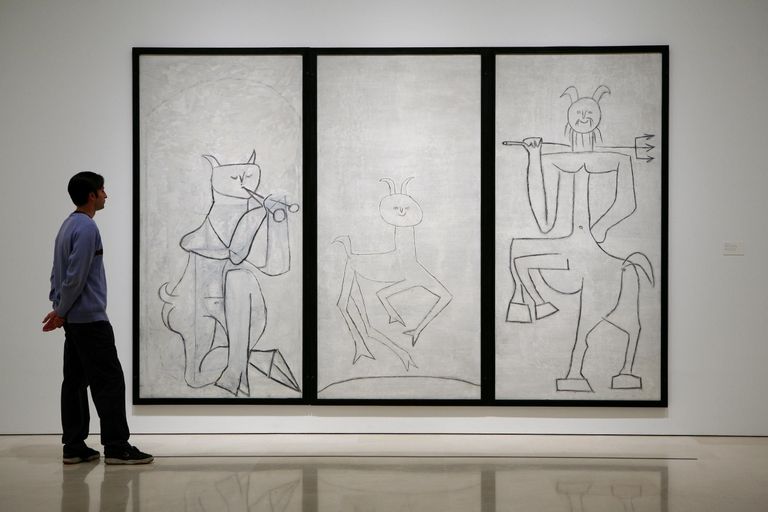 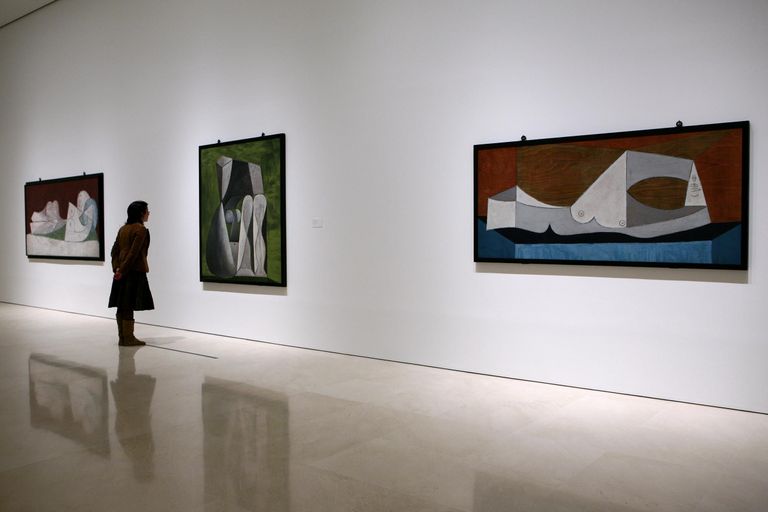 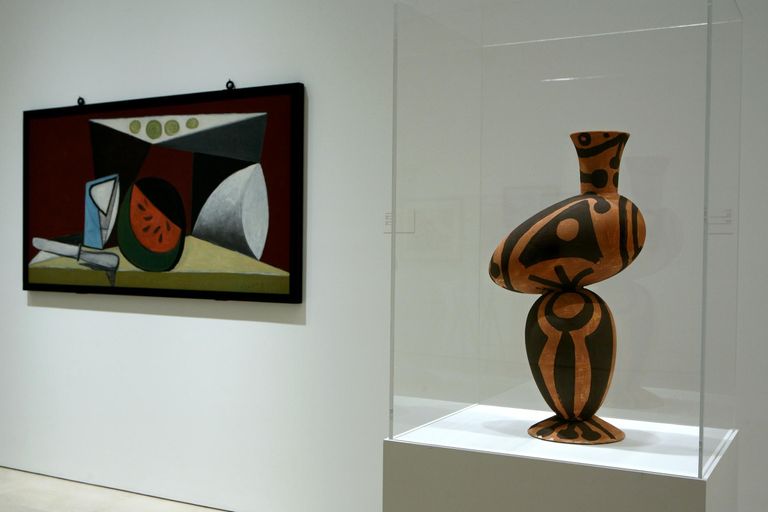 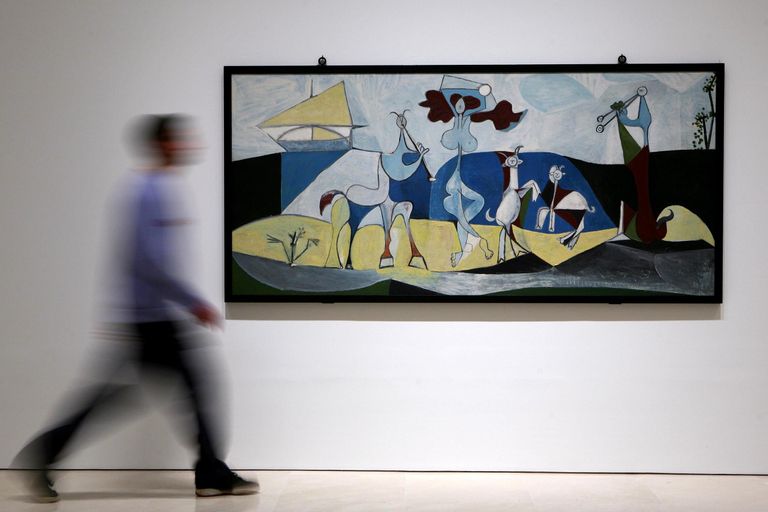