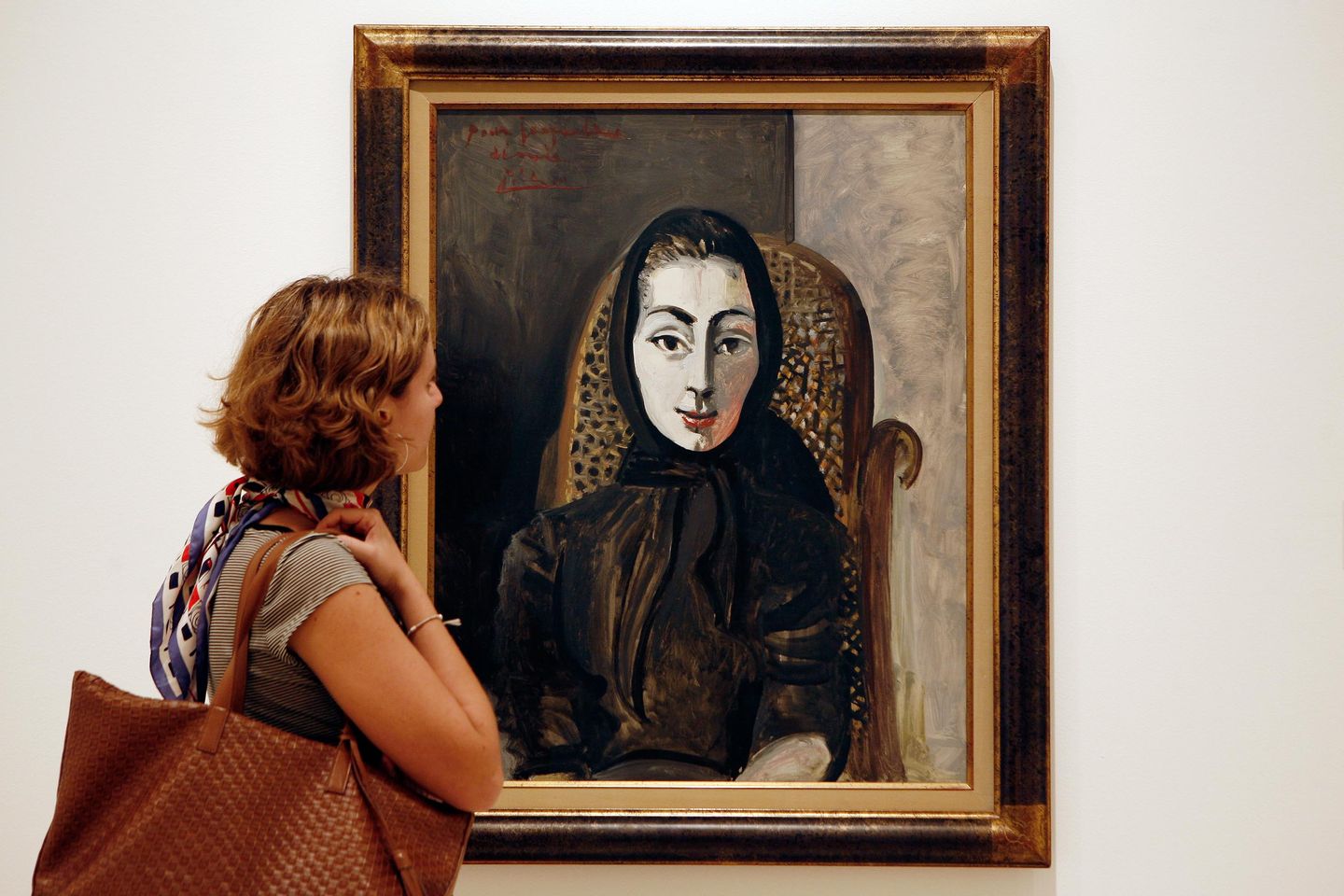 Over the course of his life, Pablo Picasso produced an extensive number of works featuring women – his favorite subject. Whether delicately sensual or profoundly carnal, temperamental or serene, these women did not merely pose; rather, through the master’s gaze, they played an active role in the creative process, becoming muses and sources of inspiration for the man who loved them and immortalized them in his work.

Picasso. Muses and Models featured a total of 46 paintings, 14 drawings and 6 sculptures that allowed an intimate glimpse into the lives of these highly distinct individuals and reveal the powerful presence of women in Picasso’s artistic production. The majority of the works on display were portraits and nudes, dating from the beginning of the 20th century, when Fernande Olivier was his companion, to the final years of his life, which he spent alongside Jacqueline Roque.

Picasso’s last years were particularly well represented in the exhibition, as the works featured – lent by public and private collections – originally formed part of Jacqueline’s collection. Understandably this is a highly personal group of works, one that Picasso deliberately chose to keep close to him and whose intimate nature make us privy to the artist’s life.

From Fernande Olivier to Jacqueline Picasso
The exhibition, then, revealed to us something of Picasso’s artistic and private universe. In it, his first companion, Fernande Olivier, represented in bronze, is given hard, chiseled features that are far removed from the youthful countenance of the model. After Fernande, Eva Gouel would inspire an art immersed in the cubist period and represented in the exhibition by Woman in an Armchair (1913). Picasso would tell Guillaume Apollinaire about this painting: “You can see it’s a real woman. Even what’s hidden is there”.

For most of the next decade, the image of the ballerina Olga Kokhlova, Picasso’s first wife, dominates his work. She’s seen in many guises in our own Collection, where she plays contrasting roles, from the bourgeois lady to the primal, monumental mother figure. Nonetheless, it was probably Picasso’s next lover, Marie-Thérèse Walter, who was represented in the most versatile array of forms: from an approachable, dreamy-eyed, silent young woman to the inaccessible sensuality of an almost mythological creature.

Quite the opposite occurred with Dora Maar, one of the most outstanding surrealist photographers of her day and Picasso’s companion in the 1930s. Dora photographed Picasso whilst he painted Guernica (1937), and hers is the anguished face he reproduced in preliminary drawings for this great painting, one of which is included in this exhibition, Woman Crying, (1937).

The works inspired by Picasso’s last companion, Jacqueline Roque, were the most numerous in the exhibition and also the most varied with regard to theme and style. In some works she is portrayed with delicate naturalism, in others schematized to the extreme. The image that Picasso reveals of his second wife is rich in nuance. The different ways in which the artist represents Jacqueline verges on the playful, hinting at the artist’s love of the theater: dressed all in black, posing like a child with her legs crossed on a rocking chair, dressed as a Turkish or Spanish lady, playing with her dog, or simply inviting reverence, like a long-necked goddess.

Though painting predominated in the works brought together in Picasso. Muses and Models, the show also featured drawings in charcoal, ink and Conté pencil, sculptures in bronze and sheet metal and collages.

Picasso. Muses and Models was organized by Bernardo Laniado-Romero, director of the Museo Picasso Málaga, and coproduced with SECC, the Sociedad Estatal de Conmemoraciones Culturales, Ministerio de Cultura. The were lent by both public and private collections in Switzerland, the United States and France, among them the Musée Picasso, Paris, and the Musée d’art moderne et contemporain, Strasbourg.

All of the works featured in this exhibition originally formed part of the collection of Jacqueline Picasso, his second and last wife.

The Painter and the Model, and even 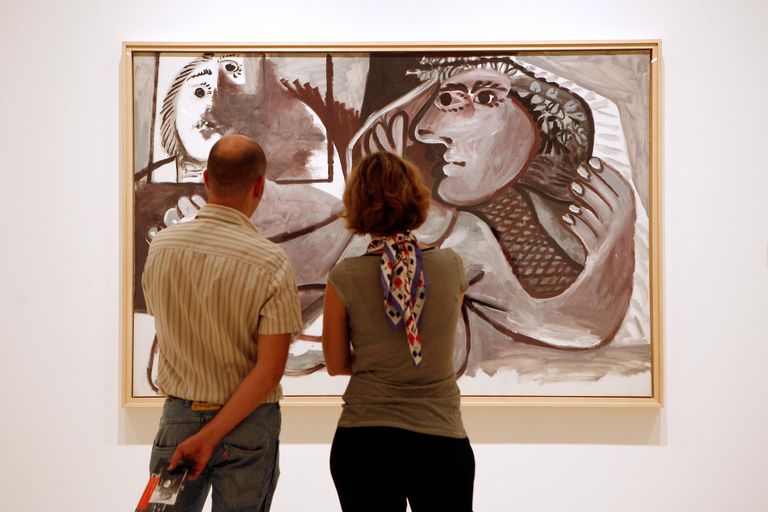 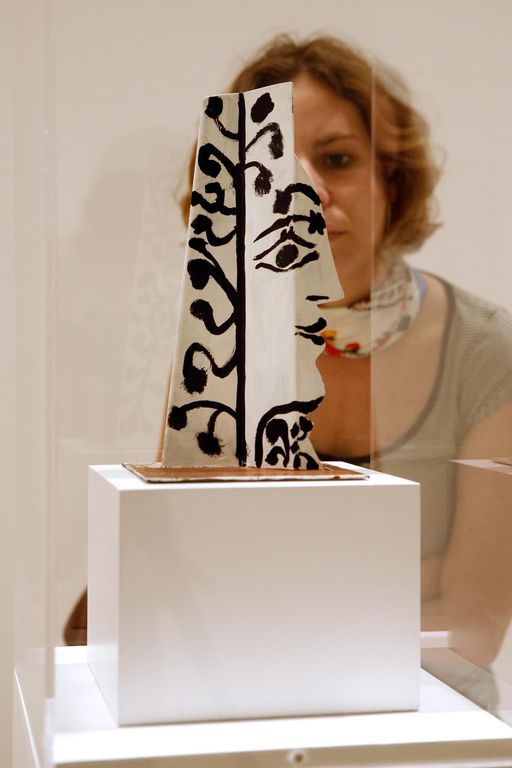 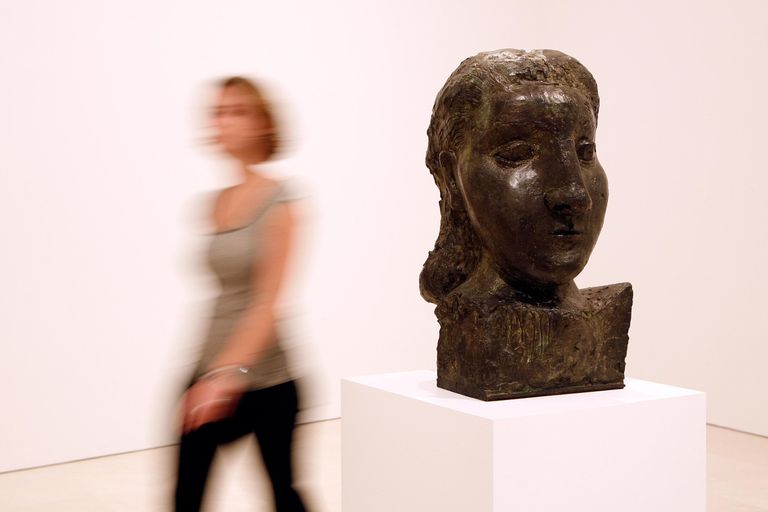 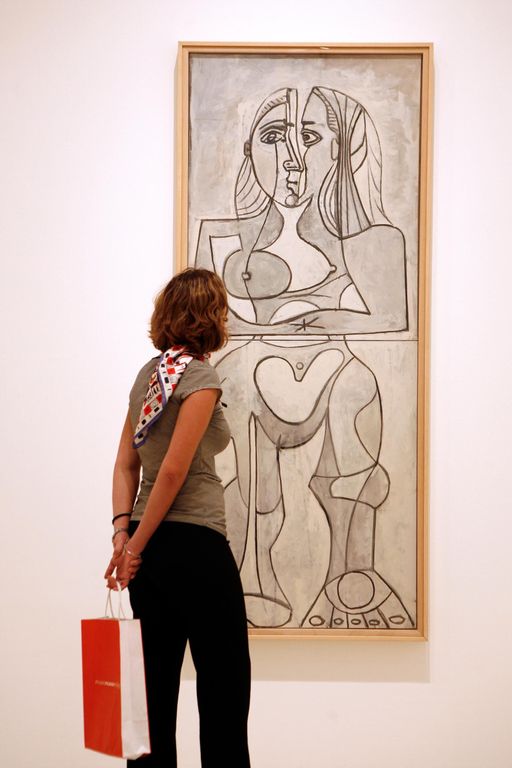