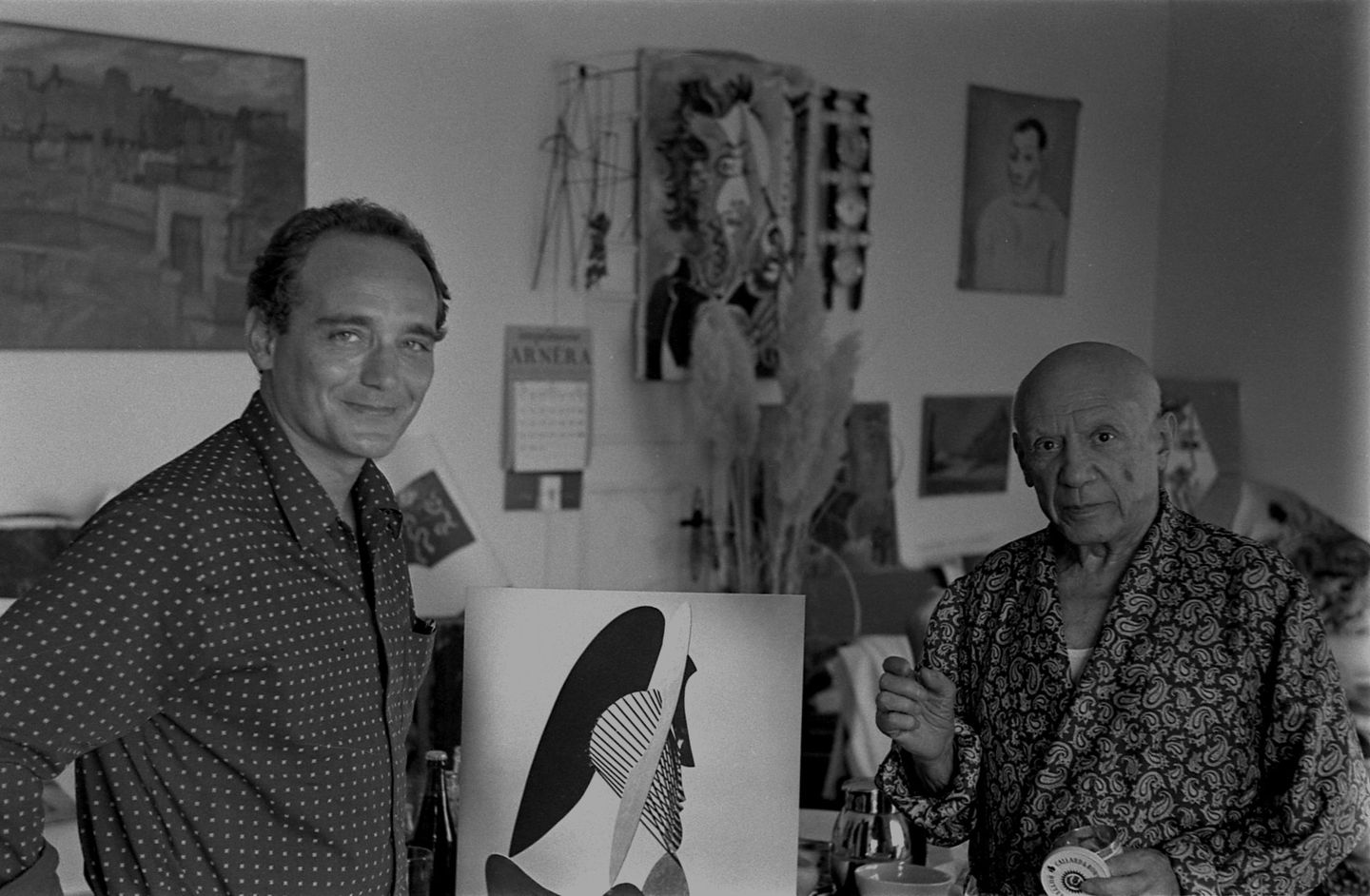 Pablo Picasso and Roberto Otero next to the photograph of the maquette for “Head of a Woman” (1962-1964), commissioned by the Chicago Civic Center Mougins, Notre-Dame-de-Vie, August 1966

The images show us the everyday life of Pablo Picasso, either at work on his latest exhibition of ceramics in Vallauris, selecting pieces for the Homage to Picasso retrospective, or receiving friends and visitors in the company of his wife, Jacqueline Roque. They also portray the artist during his creative process, and the artworks amongst which he lived every day. For José Lebrero, artistic director of Museo Picasso Málaga, this selection is presented “like a short story or an open literary narration that serves as an introduction to Pablo Picasso’s personal life.”

Picasso as Seen by Otero also shows some of the unpublished archive materials in the Roberto Otero Photographic Archive. They comprise handwritten notebooks in which the photographer wrote down the conversations he had with Pablo Picasso. In the prologue of his book of photographs and writings, Recuerdos de Picasso (Ministerio de Cultura, Dirección General de Bellas Artes y Archivos,1984) Otero says that “out of hundreds of books, there are only two books of conversations with Picasso, and both of them are by photographers, Brassaï and Otero, his only two friends who appear to have the idea of systematically writing down their talks with the artist”. The layout of his book Lejos de España (Far from Spain), which was published by Editorial Dopesa in 1975 after having been published a year earlier by Harry N. Abrams in New York, can also be seen, along with other photos by Roberto Otero displayed at the Gmurzynska gallery at Art Basel 1997.

Photographer, journalist, author and documentary filmmaker Roberto Otero (Trenque Lauquen, Buenos Aires, 1931 - Palma de Mallorca, 2004) was there at the time and his photographic proximity described for us, in brief biographical shots, the Málaga-born artist’s surroundings and way of life in the late sixties and seventies. The selection of pictures shows a time when Pablo Picasso had nothing more to prove in artistic terms and appeared to be passionately enjoying his freedom to create without being held accountable.

The archive of over five hundred pictures, which was acquired by Museo Picasso Málaga in 2005, comprises negatives, slides, copies on paper and internegatives that provide important documentary evidence focused on the final years of Picasso’s life, when he had moved to his home at Notre-Dame-de-Vie, in Mougins, South of France, in 1961.

By showcasing the Roberto Otero Photographic Archive, Museo Picasso Málaga highlights the importance of the photographic archive as a tool for discovering more about an artist, their circumstances, and their milieu.