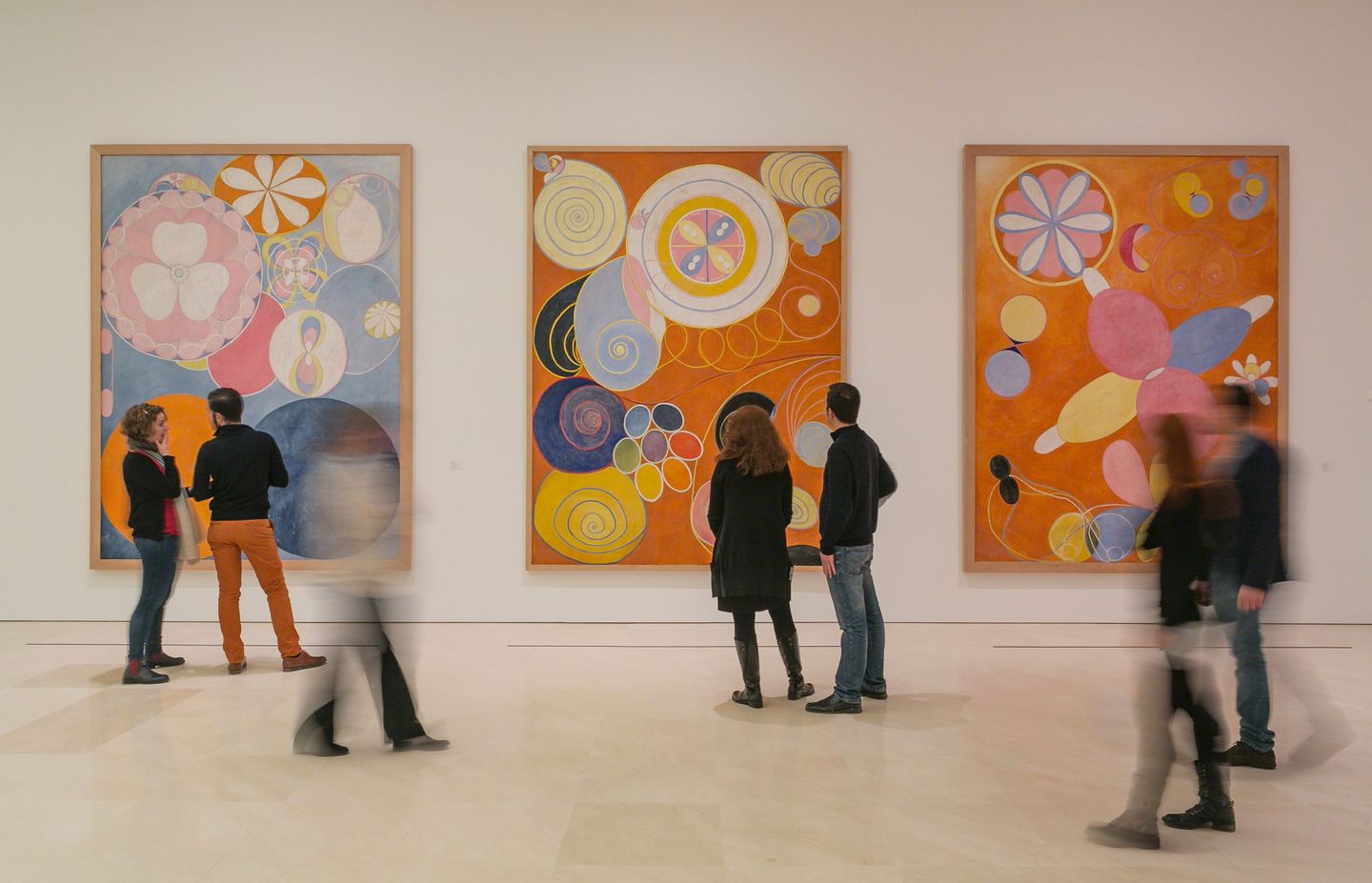 A Pioneer of Abstraction

Museo Picasso Málaga presented for the first time in Spain the unique work of Hilma af Klint, the Swedish artist who at the start of the 20th century embarked upon one of the most surprising paths that led to Abstract art. She was ahead of her time, creating an enigmatic body of work that aimed to depict a reality beyond the visible. It still has the power to impress with its forms and consistency, and a wealth of symbolism that confronts viewers with the eternal great questions concerning the essence of being and the meaning of life.

Most of those works were never exhibited during the artist’s lifetime. She did not wish them to be shown publicly until twenty years after her death, as she felt they would not be understood before that time. As the exhibition’s curator, Iris Müller-Westermann, said: “it could be said that over a hundred years ago, Hilma af Klint painted for the future. And the future is now”.

Hilma af Klint. A Pioneer of Abstraction was the most extensive exhibition ever held of the work of Hilma af Klint (1862-1944) until that time. After being shown at prestigious museums such as Moderna Museet in Stockholm, and the Hamburger Bahnhof in Berlin, the exhibition came to Museo Picasso Málaga, presenting for the first time in Spain the work of this unusual artist, with 214 works that summarized her complex, consistent and radical career.

Hilma af Klint’s work is captivating because of its vivid colour, balanced and often geometric compositions, and the monumental size of a number of her paintings. Using an abstract style that was still virtually unexplored at that point of the early 20th century, her work reveals how she undertook to portray the connection between the spiritual and the material, the microcosm and macrocosm, light and darkness, female and male. Her aim was to depict the duality by which the world is driven and, in the artist’s own words, to produce the “primeval image” that reconciles opposites and conveys the unity from which, in her opinion, all things are derived.

To do this, Hilma af Klint used a delicate symbolism that was laden with references and meanings. They sought to guide the viewer towards some kind of revelation and understanding of notions which, above and beyond their complex nature, simply represent the natural human yearning for transcendence, in a pioneering way.

A time of change and discovery

Hilma af Klint’s work is the product of her artistic training, strong creative personality and incessant spiritual restlessness. It is also the reflection of a very specific period and social context that coincided with the transition from the 19th to the 20th century, when the West was being repeatedly surprised by scientific progress - which was proving that something existed beyond the tangible - such as X-rays in 1895 and the discovery of electromagnetic waves. It was also a time when translations of the sacred texts of other religions were being made available to the public, and this led to trends such as historicism, relativism and, sometimes, agnosticism. People were questioning whether religion is just a product of the society in which it appears and for that reason, some of them attempted to seek out a higher truth that went beyond merely cultural conditioning factors.

This gave rise to such movements as Occultism, which attempted to penetrate the secrets of nature; Theosophy, which sought the fundamental truth underlying all beliefs; and Rudolf Steiner’s Anthroposophy, inspired by Theosophy, but with a strong Christian element to it. They were all attempting to supply an answer to the questions that were arising in new times. Hilma af Klint became involved in this intellectual quest, which was shared and disseminated by writers, thinkers and philosophers. She acted as a medium at spiritualist sessions, practiced automatic writing, and claimed to have painted a large number of her pictures while directly linked to her guides in the other world.

Unlike the work of Wassily Kandisky, Piet Mondrian and Kazimir Malevich, who were considered by academic art historians to have been the pioneers of Abstract, most of Klint’s works were never exhibited during her lifetime. She wrote in her last will and testament that her abstract works were not to be shown publically until twenty years after her death, because she was convinced they would not be understood until that time.

Almost a century later, Hilma af Klint. A Pioneer of Abstraction brings this exceptional artist into the public eye. The exhibition is the result of thorough research into her entire body of work – she left over 1,000 artworks – her 125 notebooks, and boxes that had lain unopened for decades. 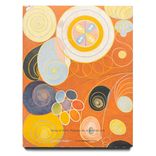 View
PublicationHilma af Klint. A Pioneer of Abstraction
Follow up the conversation#HilmaAfKlint

“You could say that more than a hundred years ago Hilma af Klint painted for the future. And the future is now." 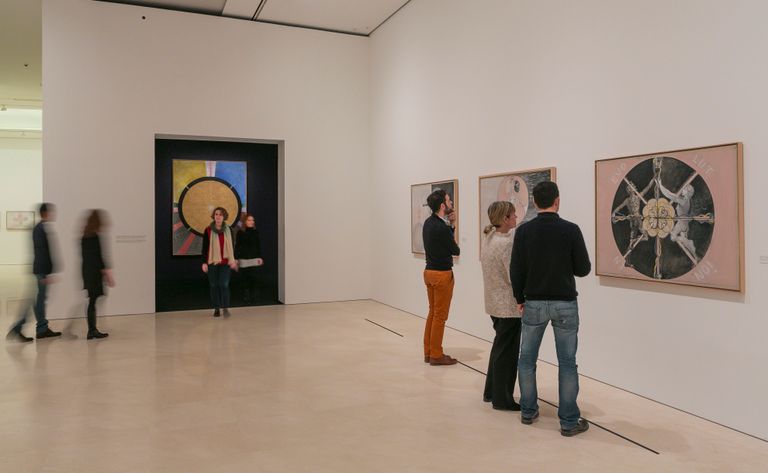 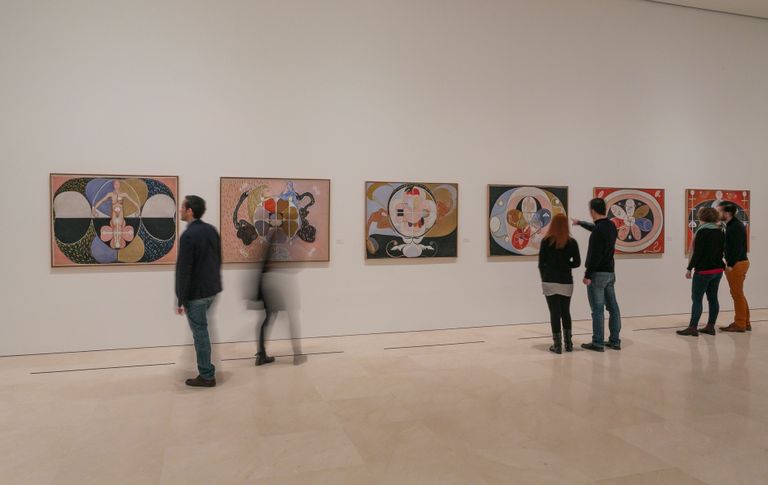 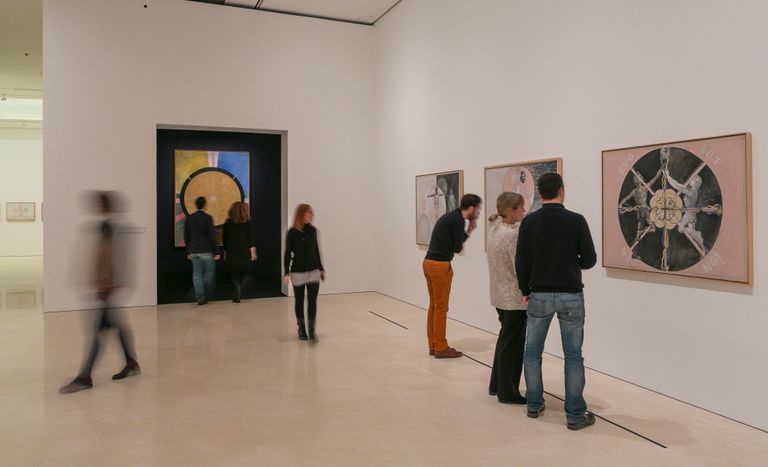