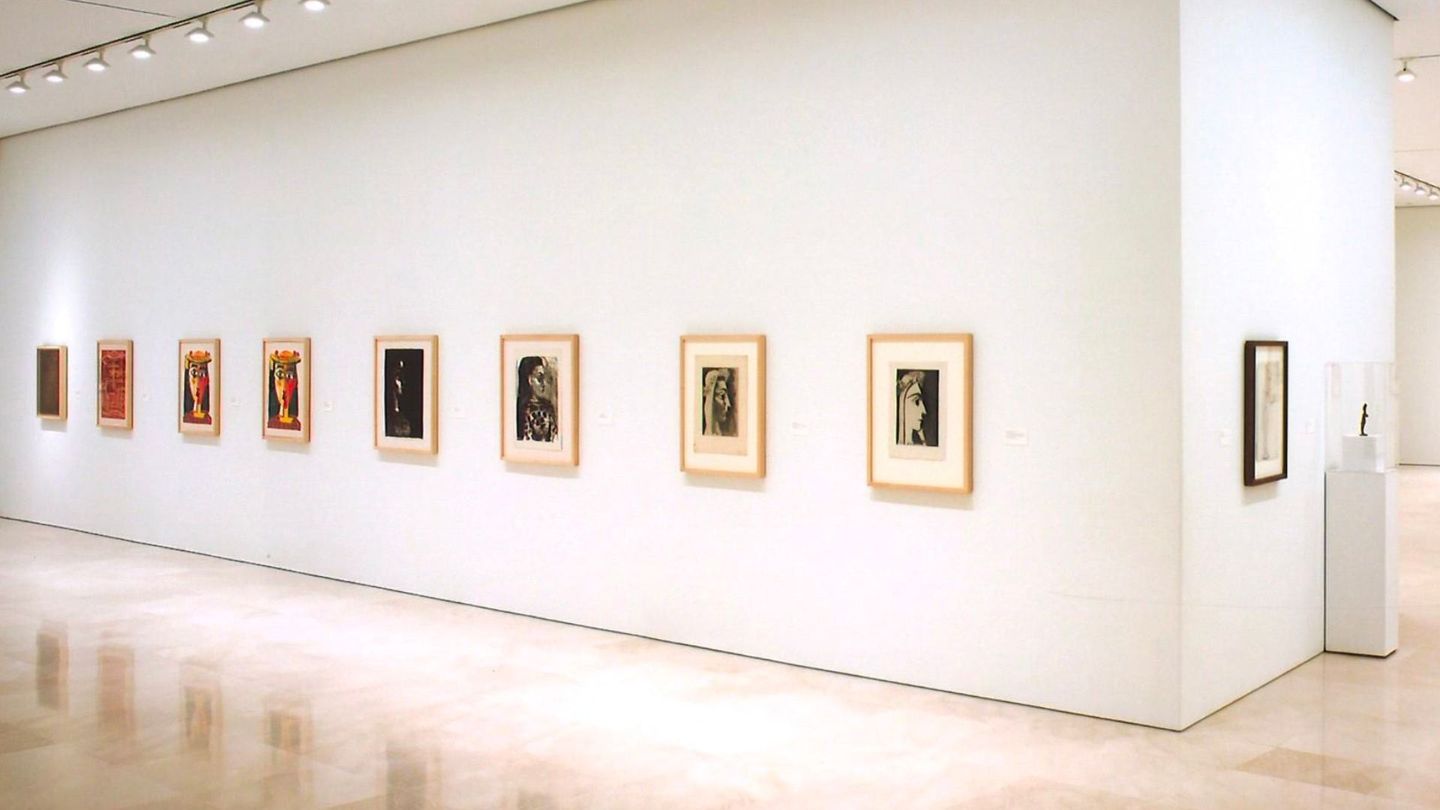 Graphic art and ceramics by Picasso

Pablo Picasso was passionate about graphic art and worked with all its options throughout his lifetime, endowing it with intrinsic value as a means of expression independent from painting, sculpture or drawing, and using a direct approach on print plates, stone and linoleum. Thanks to his father, during his childhood and adolescence Picasso received meticulous training within the classical canon which he was later able to innovate with in an avant-garde manner. He used drawing and the myriad possibilities of graphic art as fields in which to experiment, analyse and reproduce what he remembered, thanks to his powerful and playful imagination.

Picasso was keen to master every possible technique - etching, drypoint, aquatint, lithography, xylography, linocut and monotype – and always controlling every last detail of the creative process. His love of printmaking was not simply a case of transferring a drawing to a stone or a wooden, copper or zinc plate. Like other artists who were also great printmakers, such as Dürer, Rembrandt or Goya, to name some of the best-known, Picasso not only mastered the traditional techniques, but also experimented with innovative processes in his “laboratory” until he achieved new effects that depended on the surface he used. This is apparent his original linocuts, which Pierre Daix described as “relief painting”, and can be seen in the original 1959 plate on display here, on which Picasso used a gouge to produce one of his innumerable portraits of his last wife, Jacqueline Roque.

Of the 72 engravings in the MPM collection, 62 are on display here, covering the period between 1905-1971 and providing a clear and definitive overview of Picasso’s oeuvre as a printmaker. Although, as with many collections, not all periods are represented equally, all the techniques he used are on display, in a variety of forms.

The exhibition starts with The Poor (1905), a work from Picasso’s youth, halfway between his blue and rose periods, which shows a bearded man lost in thought, alongside his family in a dark landscape. It continues with the superb Portrait of André Breton, Three-Quarters View (1923), an etching that shows the 27-year-old French poet in a relaxed attitude and invites the onlooker to focus on his eyes and facial contours.

During the second half of the 1920s, Picasso produced a series of drawings and prints on the theme of the painter and the model. The MPM collection holds the aquatint Painter at Work, Observed by a Nude Model, one of the 13 prints that Picasso was commissioned to produce by dealer Ambroise Vollard to illustrate Balzac’s story The Unknown Masterpiece. The 1928 lithograph Face also dates from this period. It is dedicated to Marie-Thérèse Walter and was inspired by a photograph. In it, Picasso intimately captures the gentle features of his new partner, in contrast to the abstract and also realistic Head in Profile (1933), whose sculpted lines make Marie-Thérèse appear mysteriously attractive.

In the 1930s, Picasso made numerous prints of female nudes, indoors and out, with bacchanales, beach scenes and musical allegories, while at the same time honing his skill with drypoint. This can be seen in works such as Sculpture. Head of Marie-Thérèse Walter, in which the different parts of her head have been reduced to a conglomeration of elliptical shapes that are connected to the artist’s sculptures in Boisgeloup; Minotaur Caressing the Hand of a Sleeping Woman with his Muzzle, which is dedicated to Pasifaë’s son, who was half-bull and half-man, and is one of 11 of the 100 prints in the Vollard Suite, in which Picasso used a great simplicity of line. And again, in the hugely expressive Lament of the Women, one of 16 scenes Picasso made to illustrate the Greek comedy Lysistrata, in which three aquatints from the late 1930s stand out: Bust of a Woman with a Handkerchief, with its natural, realistic profile and wide colour range, and two portraits of the artist Dora Maar in four colours, one verging towards pink and the other to a deep red, while still maintaining her figurative features.

In the early 1940s, Picasso returned to the theme of death, and the result of his research can be seen in Composition with a Skull, a 1946 lithograph depicting a book, a skull and a jug - a symbolic allusion to knowledge, death and life – that ties in with the Spanish traditional still-life. Another unique work is the portrait Francoise, Young Woman in a Striped Bodice, a lithograph printed in 1949 which displays Picasso’s fascination with the beauty of the mother of two of his children, Claude and Paloma, and in which her intense gaze is reminiscent of a Greek or Egyptian mask. That same year, Picasso drew the charcoal Owl, once again depicting a bird that can be seen in the MPM collection in sundry positions, both in oils and ceramics.

Picasso was always interested in capturing the likeness of writers and poets, and the collection also includes his etching Rodin’s Balzac, (1952), in which, by reinterpreting the author of Pére Goriot through the eyes of the creator of The Thinker, he juxtaposed the chubby writer and a study of a headless, obese body and a disembodied head. From the late 1950s, it is worth mentioning three linocuts that are variations on an illustration Picasso drew for the book 40 Dessins de Picasso en marge du Buffon, in which he used dynamic lines to draw a Young Pigeon in a natural setting; several bacchanalian scenes, with a child, a man and an owl and inspired by Classical themes; a lithograph in six colours showing his studio in La Californie, and two busts of his new muse, Jacqueline, highlighting the nape of her neck and her blouse in the first one, and the expression in her eyes in the second.

From the 1960s to 1971, the exhibition contains some bacchanalian scenes, Jacqueline as a Bride, with a Hat and Printed Blouse; Head of a Bearded Man; four pieces from Suite 347, printed by Picasso in 1968, three of which allude to the character of La Celestina, and another to Raphael and La Fornarina; and four etchings from his last great suite, No. 156. The etchings are laden with eroticism, like a strange tribute to Degas and to the distant observer. This is because, for Picasso, the print, along with the all rest of his work, was an act of voyeurism.

Two drawings on a one-year loan from the Bernard Ruiz-Picasso Collection and a sculpture owned by MPM create an automatic connection to two figures who had a major impact on the work on display in the museum. First, the elaborate ink-on-paper drawing Seated Woman (1938), showing Dora Maar, and, in contrast, Standing Nude (1944), in which a few simple pencil lines have endowed the suggestive forms of Françoise Gilot with movement. It also establishes a correlation with Standing Woman, moulded in white clay by Picasso in 1947, which can be seen beside it.

With his ceramics, Picasso establishes an open artistic dialogue with his sculpted work, thanks to his great ability to experiment with different materials. This versatility, along with his avant-garde spirit, enabled him to breach the traditional divide between artistic genres. His ceramics are proof of this, and in them he was able to use his masterful draughtsmanship, his outstanding gifts as a painter and his very subtle talent for modelling both Classical and modern forms.

Picasso’s real work as a ceramicist began in 1946, although his first attempts date from earlier, when in 1906 he met Paco Durrio, a collaborator of Gauguin’s, in Paris, then in the 1920s Jean Van Dongen, brother of the painter Kees Van Dongen. However, he did not fully embrace the medium until 1946, when he met the owners of the Madoura pottery in Vallauris. He would return there in the summer of 1947, keen to put into practice his own innovative ideas, and would remain associated with the pottery until the final years of his life.

The pieces on show here date from between 1948 and 1965. In this small and select group of works, the unlimited creative force of Picasso can be felt. Here too, with his characteristic audacity in so many artistic fields, Picasso expressed himself using every possible format and technique.

Two oval dishes in different styles, dating from 1948 and 1957, show two of Picasso’s familiar themes. The head of a Faun and a Bullfight. Another Faun (1957), for which Picasso used the Roman terra sigillata technique, occupies one of the larger plates, with a Face (1965) the protagonist of another one in a similar size which is painted with engobes and oxides.

Among the variety of whimsical objects Picasso gave life to in his ceramics is the Insect, which he imagined as a jar whose handles, originally designed for carrying it, have been turned into the legs of the unusual animal. He put its head at the opening of the traditional Provencal Gus or Douire that were mass-produced in the Madoura workshops. 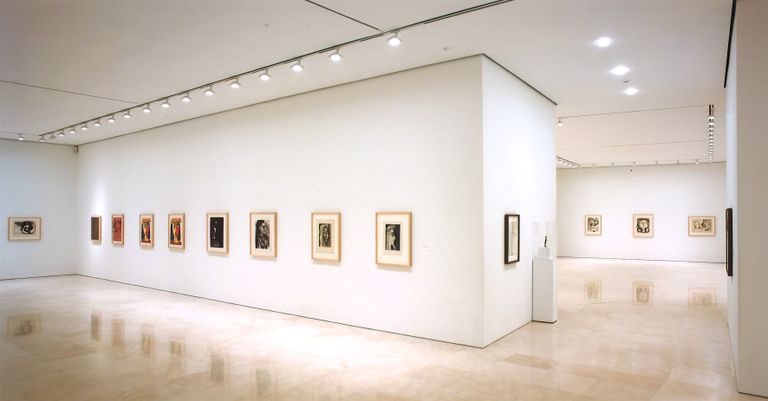 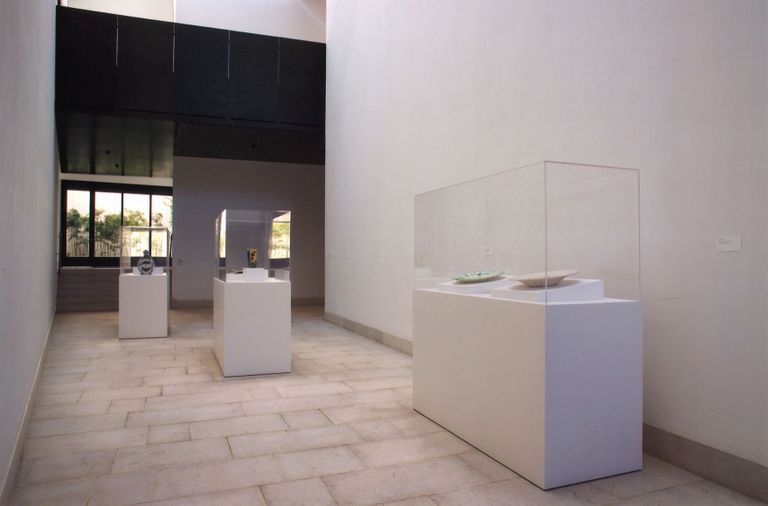 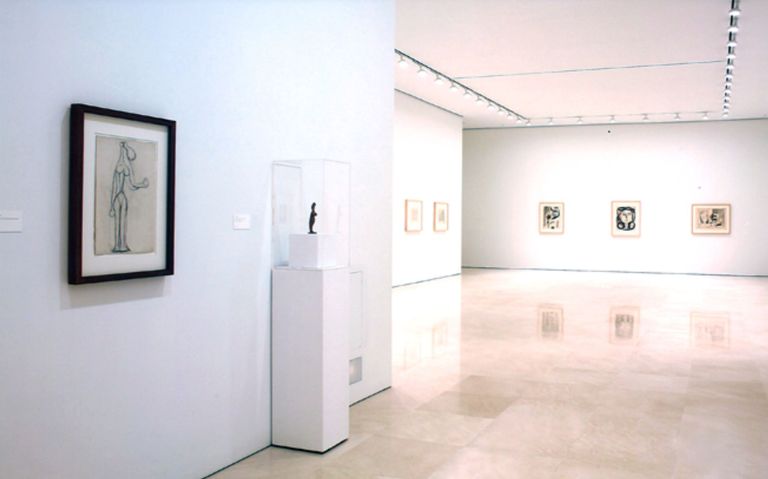 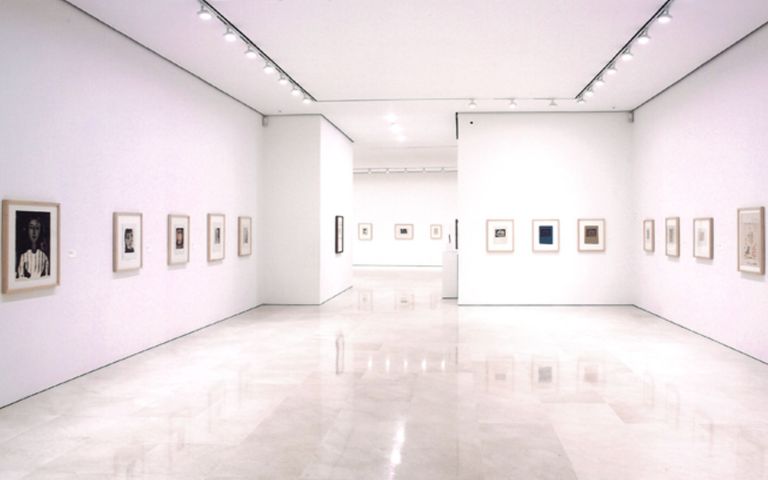