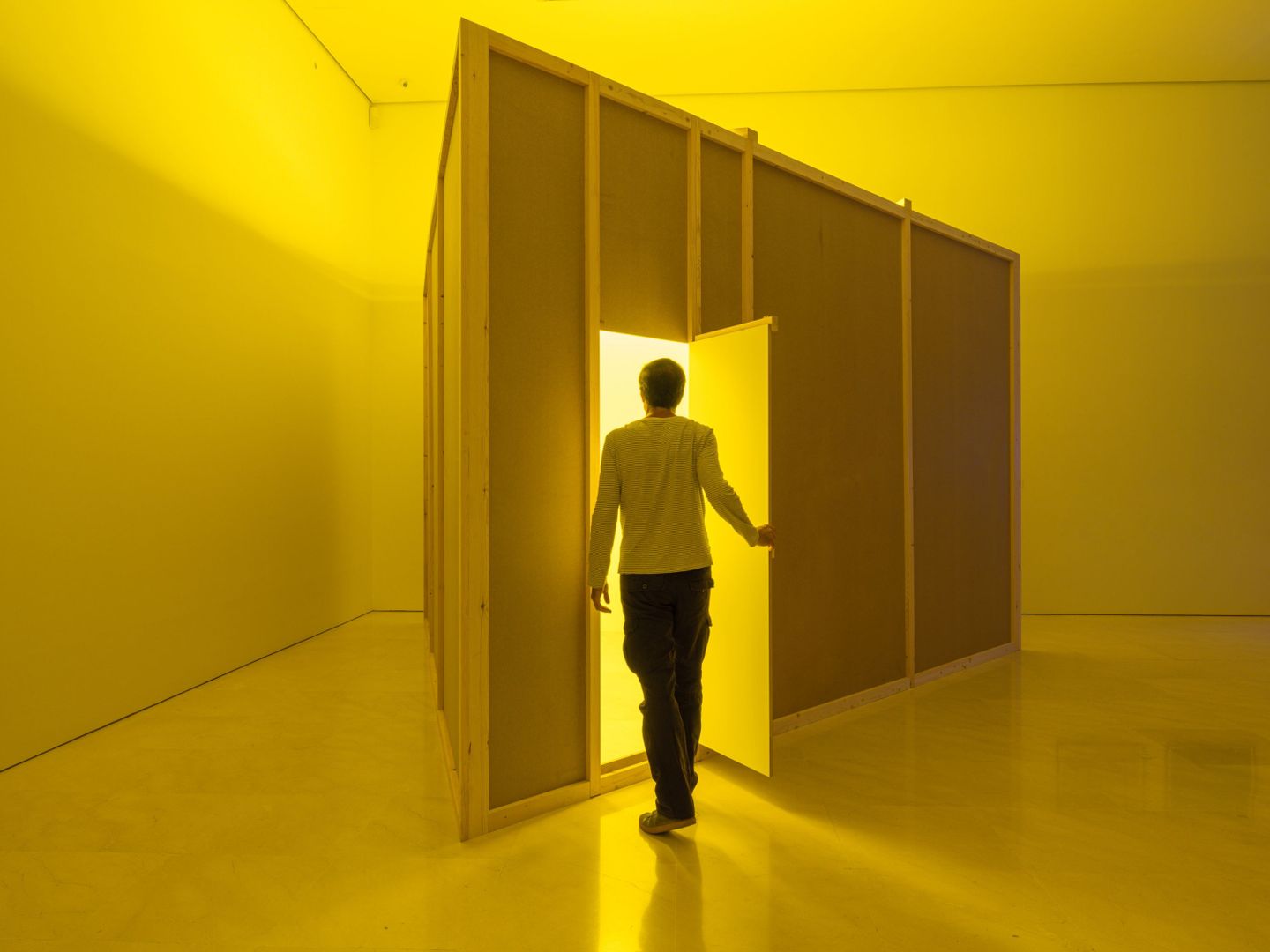 Museo Picasso Málaga presents Bruce Nauman. Rooms, Bodies, Words, an exhibition on an artist whose innovative work centers on his understanding of art as an activity or process, rather than as the production of objects. This is his first major exhibition in Spain for 25 years.

With abundant references to music, dance, literature and philosophy, Bruce Nauman’s work generates in viewers the kind of responses that are associated with provocation, conflict, tension, disorientation, and anxiety, via a relentless repetition of language and form.

Bruce Nauman. Rooms, Bodies, Words, brings together almost one hundred works that highlight the range of mediums with which this U.S. artist works: from architectural installations, sculptures and neons, to videos, drawings, silk-screening and photography, amongst others.

Bruce Nauman (Fort Wayne, Indiana, 1941) has spent more than 50 years inventing ways to convey both the moral hazards and the excitement of being alive. Employing a huge range of materials and working methods, he reveals how the mutable experiences of time, space, movement and language provide an unstable foundation for understanding our place in the world. For Nauman, both making and looking at art involves “doing things that you don’t particularly want to do, putting yourself in unfamiliar situations, following resistances to find out why you’re resisting.” His work compels the viewer to abandon the safety of the familiar, keeping us alert, ever vigilant, and wary of being seduced by easy answers.

Investigation is essential to Bruce Nauman. It is present as part of his creative process, and thus apparent in certain pieces. His work is noticeably influenced by sources from contemporary music (John Cage), modern dance (Merce Cunningham) and literature (Samuel Beckett). Gestalt psychology is the first major influence on Nauman’s work and is derived from his interest in phenomenology and behaviourism. He applies it to his focus on human behaviour when faced with unpleasant or upsetting situations. Other major influences can be found in the philosopher Ludwig Wittgenstein’s criticism of the validity of language and its meaning and representation, in such works as Violins/Violence, 1983; author Elías Canetti in his study on the behaviour of the masses, in Body Pressure, 1974; and also writer Samuel Beckett’s bleak view of the destiny of mankind, in his piece Model for Room with My Soul Left Out, Room That Does Not Care, 1984.

Nauman’s art has always defied categorization. Watercolours, flashing neon signs, sound installations, video corridors - he is constantly shifting between all these and more, never conforming to a signature style. But underneath this sheer variety, crucial themes persist, with disappearance one such recurring impulse throughout his 50-year-long career.

The diverse elements that make up Nauman’s work, and whose origins lie in such apparently dissimilar and hermetic areas as philosophy, conjuring and choreography, involve gaining or attempting to gain control over the viewer’s experience of an event, action or situation. The artist proposes actions that elicit emotional and physical responses and perceptive psychological suggestions from the viewer and, in many cases, they involve the creation of a cacophony of sound and images. The public becomes both the subject and performer when face-to-face with a work that is constantly “happening”. This can be seen in Für Kinder  (2010) and in Clown Torture (1987). Throughout his career space and its occupancy, architecture and its limitations, engineering and its violence, have all heightened Nauman’s interest in focusing on the fundamental mechanisms of perception and psychology. As the San Francisco Museum of Modern Art Director Neal Benezra states, Bruce Nauman "successfully integrates our consciousness with our feelings. In his works, we do what we see", and this is evident from the public’s submission to imposed messages and images.

Bruce Nauman rejects the practice of photography, in the sense of narrative images, in favour of documented records. This can be seen in the works in this exhibition dating from between 1966-1967/1970: Self-Portrait as a Fountain, Feet of Clay, and Eating My Words. First film, then video soon became one of the primary mediums in his oeuvre, either in a supporting role – seen in works such as Flesh to White to Black to Flesh (1968) and Violin Tuned D E A D (1969) – or as a key element of his architectural installations and sound sculptures.

With this selection of corridors, neons, sculptures, video and sound works, architectural installations, performances and works on paper, the exhibition at Museo Picasso Málaga aims to illustrate the thinking and ethical views of Bruce Nauman. His irony and incisiveness are apparent in his plays-on-words and in the relationships that are established between viewer, space and artwork. Jointly curated by Prof. Eugen Blume, from Germany, and the artistic director of Museo Picasso Málaga, José Lebrero Stals, this is the first large-format exhibition of Nauman’s work in Spain for 25 years.

This Museo Picasso Málaga exhibition will be moving away from the space normally used for temporary exhibitions, with a dozen of Bruce Nauman’s works distributed around other architectural spaces in the gallery. In its “Patio de Columnas” courtyard, visitors will be able to see the sculpture Smoke rings: 2 Concentric Tunnels Skewed, Non Communicating (1980); the archaeological site will house the video installation Clown Torture (1987), and the in the inner courtyard visitors themselves will be able to be part Body Pressure (1974), in which students form the Pepa Flores professional dance conservatory will encourage interaction with the audience, Monday to Saturday, from 12 noon until 12.30h. Other works, featuring installations and videos by Nauman, have been placed in different areas of the museum.

Unlike many of his fellow artists who also began their careers in the 60s, Bruce Nauman has refrained from taking part in the critical discourse surrounding his work. He has written no reviews and given no public talks, so our perception of him is an image of silence. For this reason, Museo Picasso Málaga, the American university publisher MIT Press, and Editorial Antonio Machado have joined forces to commission the translation into Spanish in its entirety of the legendary reference book Please Pay Attention Please: Bruce Nauman's Words. Writings and Interviews, by Janet Kraynak, a collection of interviews and writings by Bruce Nauman that was published by MIT Press in 2005. The Spanish-language edition, Por favor, preste atención, por favor: palabras de Bruce Nauman. Escritos y entrevistas, fills the existing void regarding books on the artist published in Spanish.

The book is an archival resource that works as a counterpoint to Nauman’s taciturn reputation. It highlights the historical and critical value of the interviews that he has given. For Janet Kraynak, one of the aims of the book is to “demonstrate the conceptual and philosophic continuity of what seems, at first sight, to be an art practice composed of radically distinct features that echo the underlying ideas of works that, in principle, do not appear to be related and which are of great value when interpreting Nauman’s work”.

Museo Picasso Málaga is also publishing the exhibition catalogue which is, as always, abundantly illustrated. It contains texts by the curators, Eugen Blume and José Lebrero Stals, as well as authoritative texts on understanding the work of the artist, by Theodore Roosevelt, Gaston Bachelard, Elias Canetti, Hannah Arendt, Michel Foucault and Samuel Beckett, and historiographic texts by Marcia Tucker, Kathryn Chiong and Rosalind Krauss.

This year’s edition of Summer Cinema features evenings when participants can visit the exhibition and then enjoy a film screening in the garden of Museo Picasso Málaga. The first session will be on Friday 21st June, with the screening of The Rider, directed by Chinese American director Chloé Zhao in 2017. The film is about a rodeo star who has to change his life following a riding accident. On Friday 12st July, it’s time for Dogville, by Danish director Lars Von Trier. This 2003 film tells the misfortunes of a woman on the run who agrees to work for the inhabitants of a village in exchange for shelter. Tickets are 10€ and are on sale now, at museopicassomalaga.org

Gestalt psychology is the primary influence on Nauman’s work and is derived from his interest in phenomenology and behaviourism. He applies it to his research on human behaviour when faced with unpleasant or upsetting situations. Based on this, Museo Picasso Málaga is providing Gestalt therapy sessions, in which the experience of visiting the Bruce Nauman. Rooms, bodies, words exhibition rooms is linked to producing art via Gestalt therapy. The activity Conflict, tension and provocation. Experiencing Gestalt therapy in Bruce Nauman’s work, will take place on 11th and 18th July from 5pm to 7.30pm.

Dance features once again among MPM’s activities. As part of the museum’s accessibility programme, the workshop Tension and Expression for the elderly and the young is scheduled for 5th July, and is aimed and encouraging collaborative art practice and creation via the body. The Dance and Play workshop invites families to create a space where parents and children can get together and investigate, using dance, play and creativity. For this activity, pre-register on the museum website (5€ per person). Both dance workshops are given by Colectivo Lisarco.

This summer, youngsters aged 4 to 15 will also be able to explore the work of Bruce Nauman and some of the issues it addresses through wordplay, examining the concept of space, drawing with light, and exploring the concept of time through music. The Space, light and words holiday workshops will be held weekly throughout July.

This latest exhibition at Museo Picasso Málaga will be the focus of the Gallery Talks guided tours, which are held on Saturdays at noon. To take part, simply register at the ticket office, as the tour is free with the price of admission.

SPECIAL PROGRAMME OF ACTIVITIES AT THE END OF AUGUST

For the last week in August, and coinciding with the end of the exhibition, experts will be working alongside MPM to prepare a special programme on Bruce Nauman’s work and his relationship with other art disciplines such as minimalist music and contemporary dance. There will also be screenings of films by Samuel Beckett and other cultural and educational activities.

Given the relationship and proximity of Bruce Nauman’s work with what is known generically as minimalist music, along with the influence of this music and the artist’s own identification with it, artist and composer José Igés will be giving a talk on the subject of this generation of musicians, with a talk-listening-narration session on Thursday 29th August at the MPM Auditorium. On Saturday 30th August, the venue will also host the talk Bruce Nauman-Samuel Beckett, by poet and essayist Jenaro Talens. The work of writer Samuel Beckett and artist Bruce Nauman share an interest in the body and space. In their work, they both address the fundamental issues that individuals must face in the contemporary world, questioning the human condition and identity. Finally, dancer and choreographer Luz Arcas will also be presenting a dance project that week, in the gallery exhibition rooms. The full calendar for schools and for the general public, along with all other information on this exhibition, can be found on the Museo Picasso Málaga website. 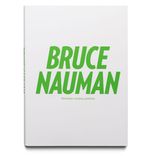 View
PublicationBruce Nauman. Estancias, cuerpos, palabras
Follow up the conversation#BruceNauman
Organized by:
With the collaboration of: 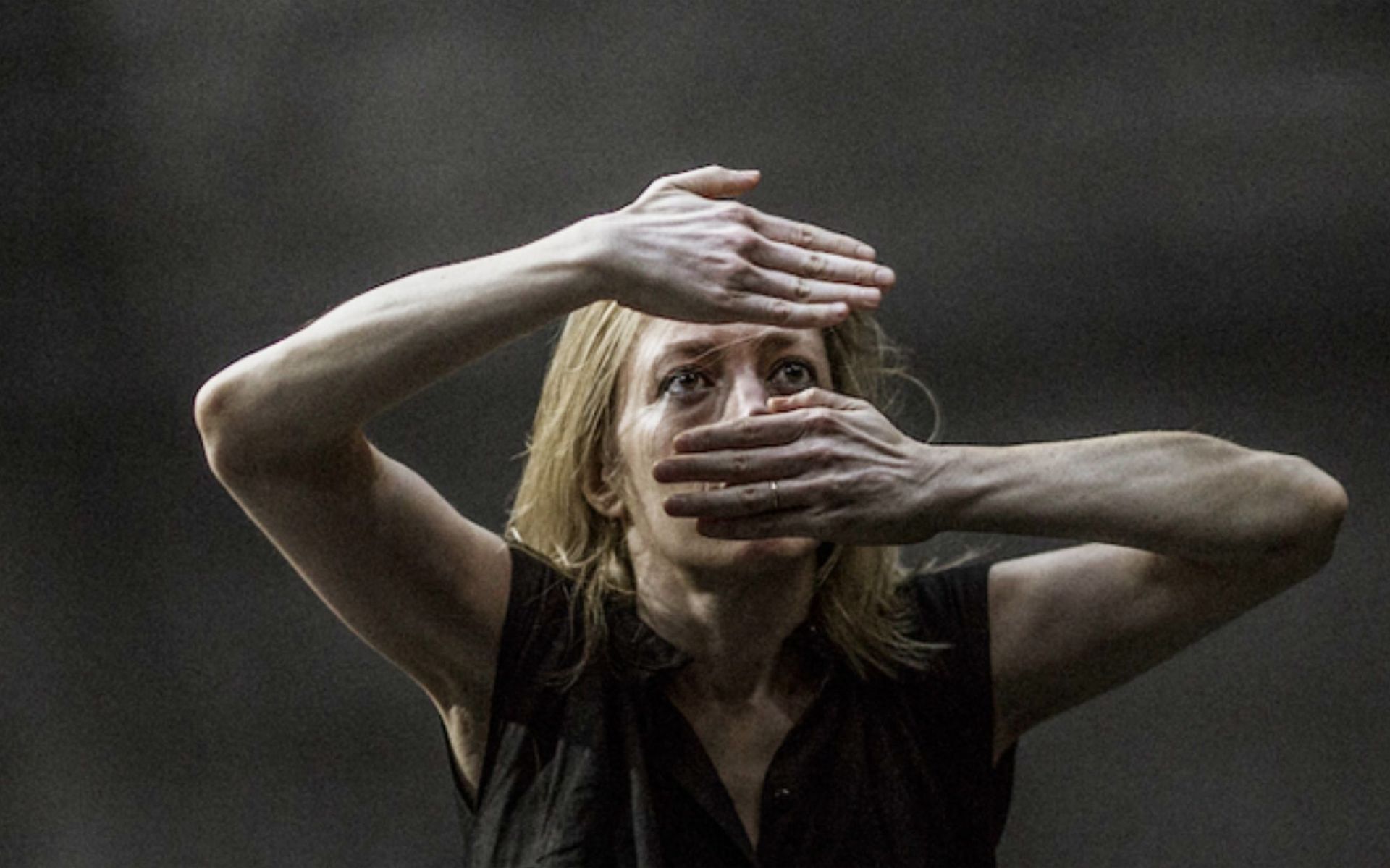 Room with my soul outside 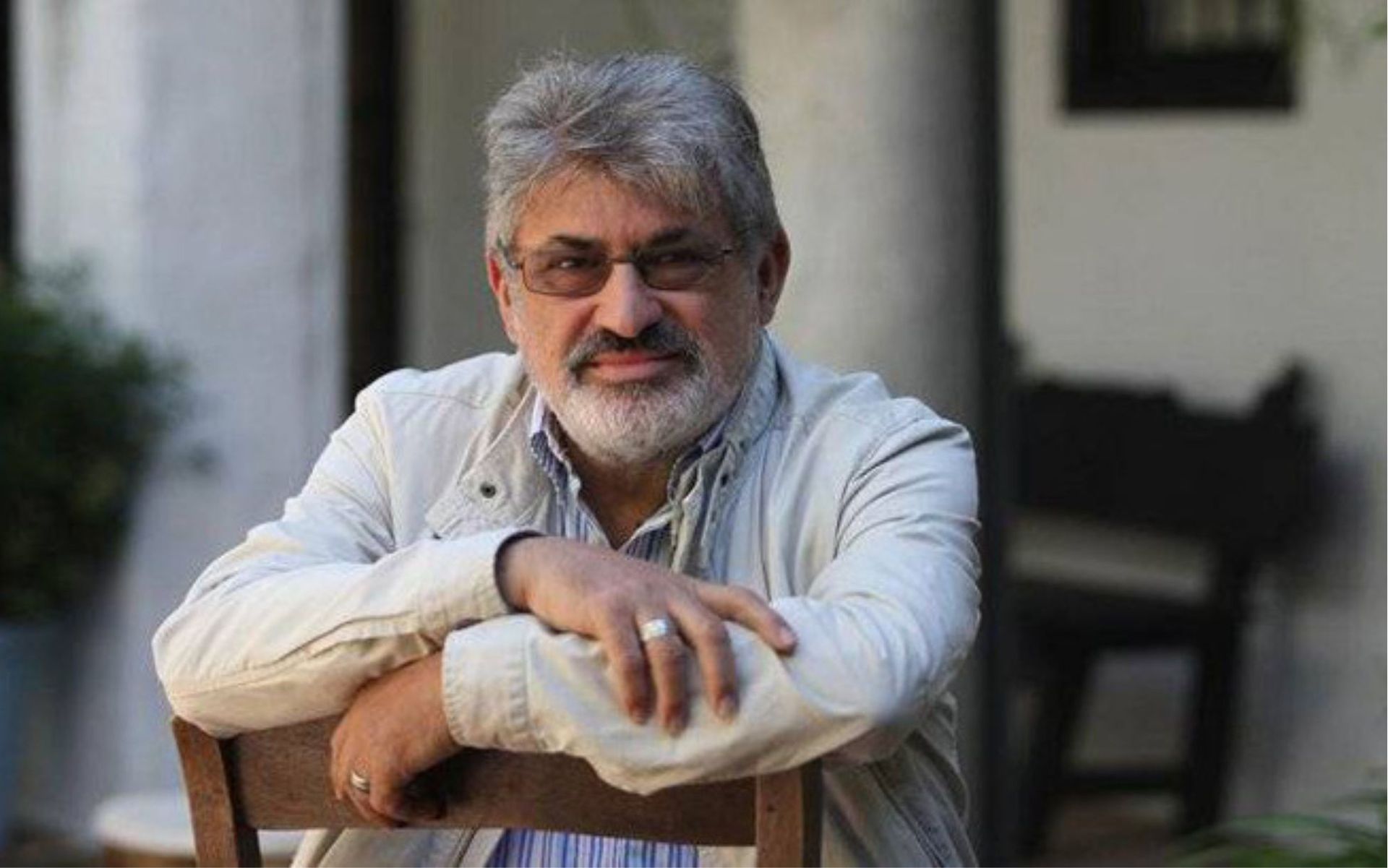 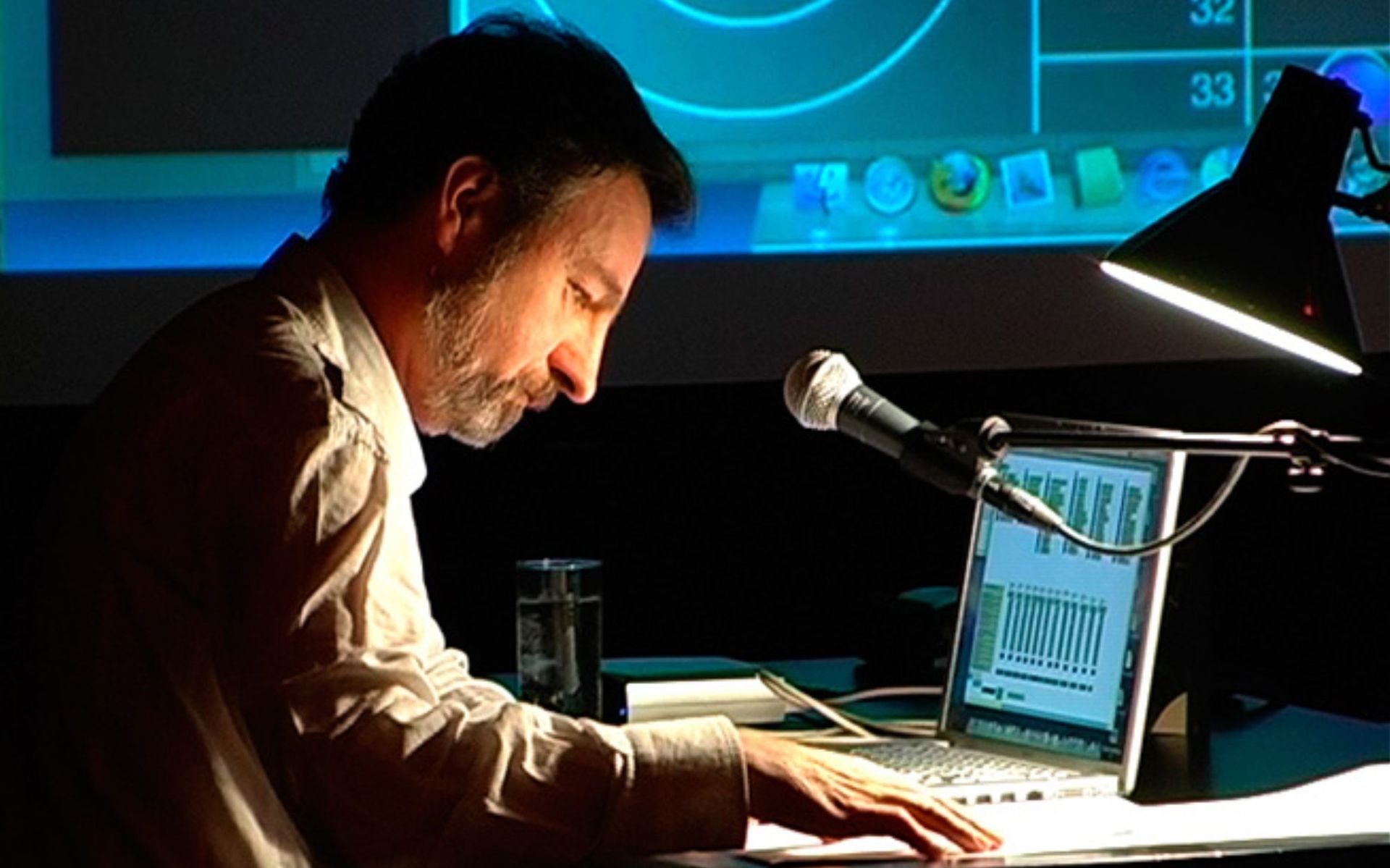 “Making and looking at art involves doing things you don’t particularly want to do, putting yourself in unknown situations, following resistance to find out why you resist” 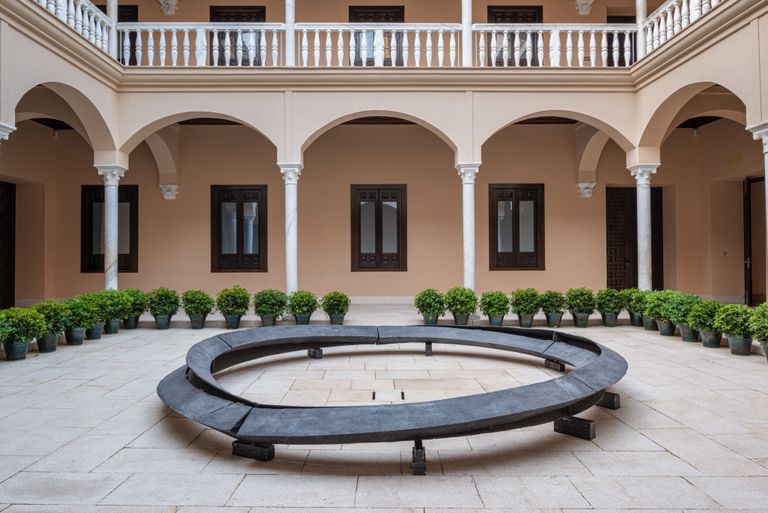 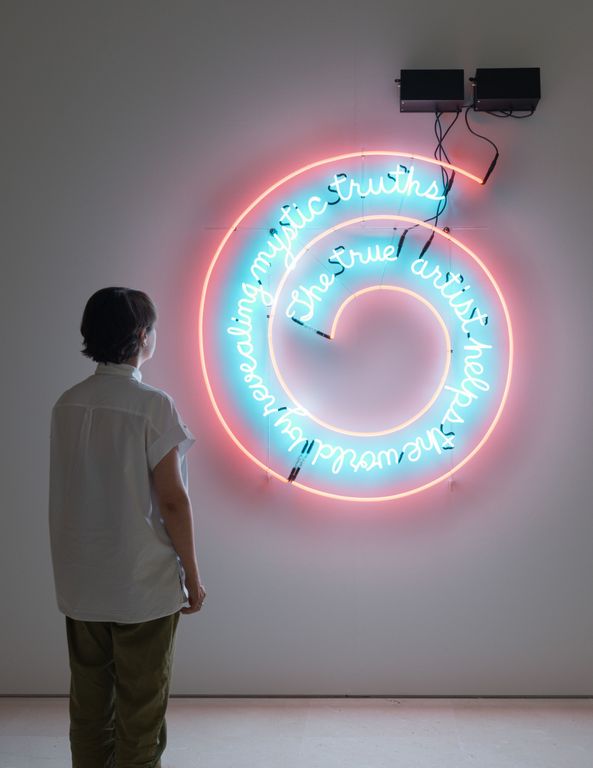 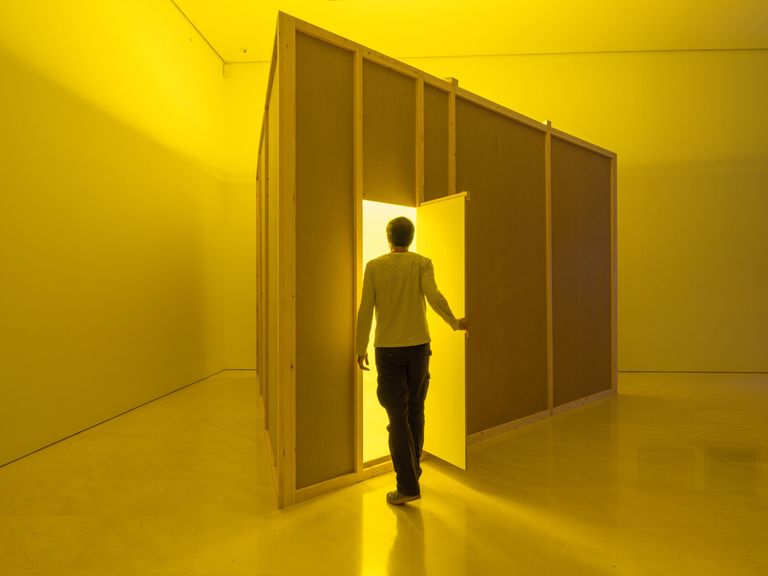 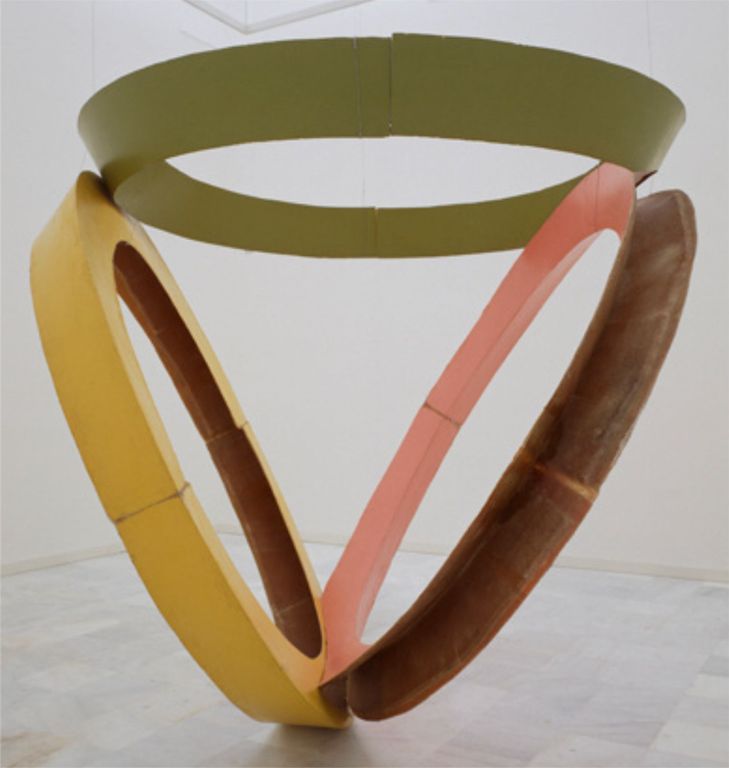 Video. "Poke in the Eye/Nose/Ear"