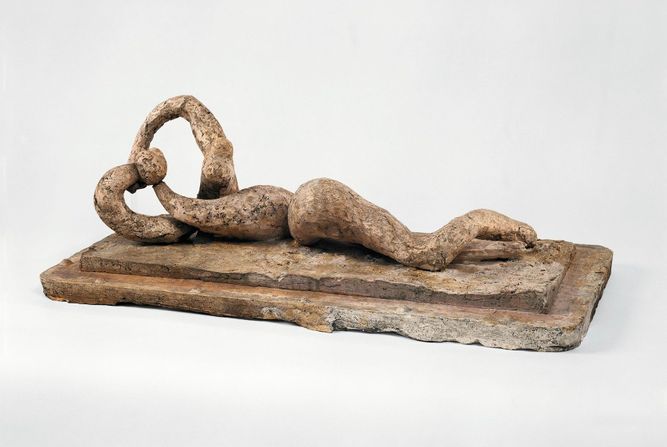 Although Picasso never officially joined the Surrealist movement, he did share many of its ideas and incorporated Surrealist elements, such as transformed and distorted figures, into his works. During the 1930s, installed in Boisgeloup, he focused primarily on sculpture.

‘I always aim at the resemblance. An artist should observe nature but never confuse it with painting. It is only translatable into painting by signs. But such signs are not invented. To arrive at the sign, you have to concentrate hard on the resemblance. To me, surreality is nothing, and has never been anything but this profound resemblance, something deeper than the forms and the colors in which objects present themselves.’ 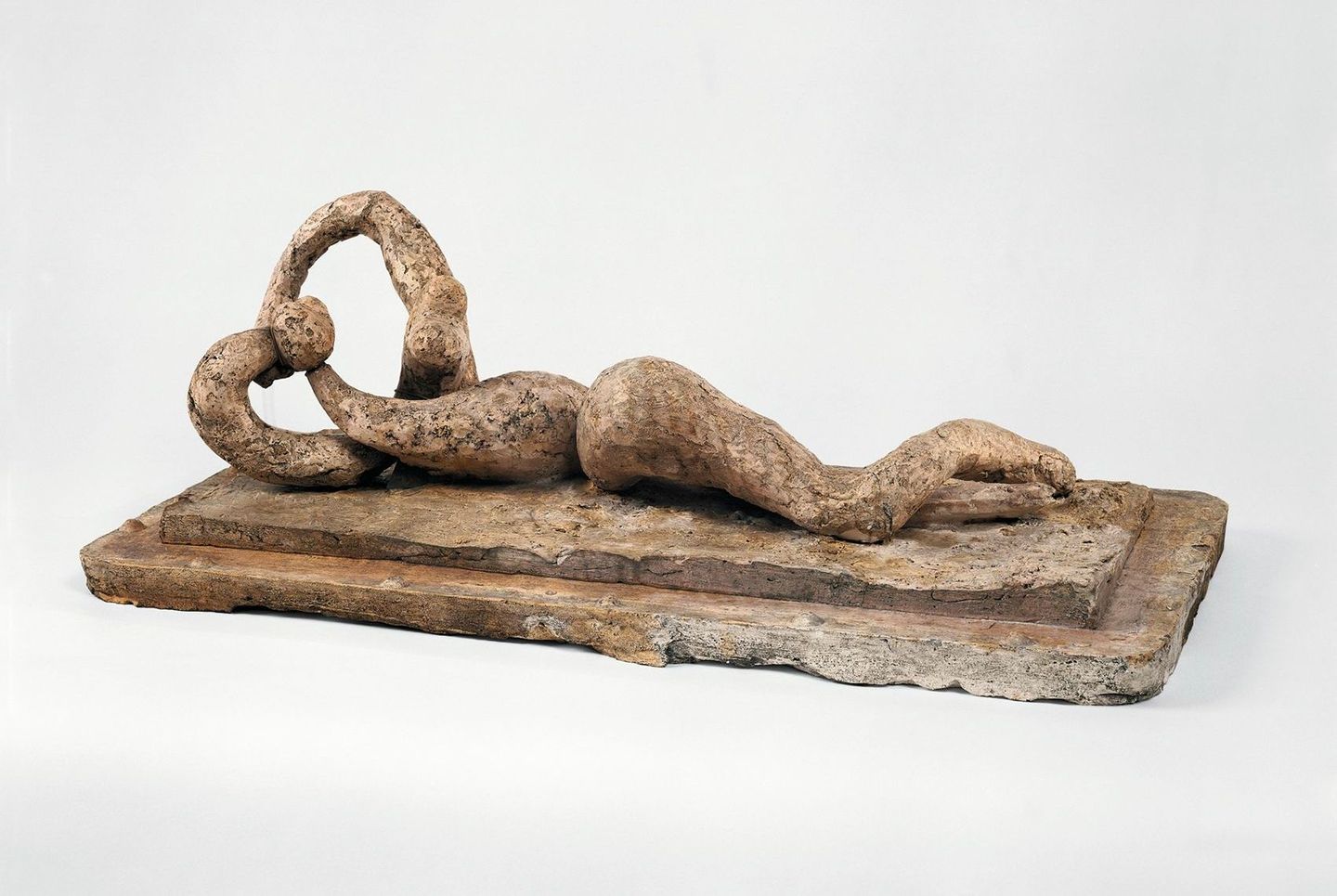 In 1931 Picasso modelled several bathers in plaster, an already familiar subject within his pictorial imagery and one associated here with Marie-Thérèse, an excellent swimmer according to different witnesses. Upright and in movement, the bathers echo the agile dancers of Edgar Degas, whose bronzes Picasso discovered in July at the exhibition Degas: portraitiste sculpteur at the Musée de l’Orangerie. Stretched out on a sandbank, arms arching above her head, the Reclining Bather has more of a rapport, however, with Francisco de Goya’s La Maja desnuda (prior to 1800, Museo del Prado, Madrid) and with the recumbent nudes of Henri Matisse, whose sculptures the Galerie Pierre had brought together the year before.

The bather’s arabesque outline consists of four independently modelled units, knitted together in two places, from which the sculpture as a whole unfolds: the junction between the torso and the hips, prolonged by the thighs; and that of the head around which the arms pivot in an arabesque and before which the breasts stand up proudly. As shown in drawings dating from August and September, which prefigure the modelling, the arc described by the arms above the head is balanced by the roundness of the torso and the horizontality of the legs. To construct the figure Picasso conceived each of the elements that structure the body both individually and in a modular way. The masses modelled in white plaster evoke bones.

As he confided to Brassaï years later apropos of ‘the white skeleton of a bat, attached to a black support, in the attitude of crucifixion’, Picasso admits to having ‘a real passion for bones’: ‘I have many others in Boisgeloup: skeletons of birds, dog’s and sheep’s heads. I even have a rhinoceros skull. […] Have you noticed that bones are always modeled and not carved, that you always have the impression they come from a mold, that they were first modeled in clay? Any bone you look at, you always find fingerprints on it. […] The fingerprints of the god who amused himself fashioning them – I can see them on any bone whatsoever.’

The asperity of the plaster reveals the nuances of the modelling: an abrupt cutting of the surfaces, nicks made by a knife in the facial details, a smoothing of the rounded parts and the roughness of the material. A diversity in the surface that renders the figure vibrant and desirable and which corroborates the sinusoidal rhythm of the posture. Although the small head begs comparison with the Venus of Lespugue, discovered in the Pyrenees in 1922, two casts of which Picasso acquired, the presence in the studio of a copy of a Greek statue, draped in a long peplos, underlines the influence of antiquity and beyond that the entire history of painting, in which the motif of a recumbent Venus constitutes the classic subject par excellence. Following Titian, Goya, Manet and Matisse, Picasso co-opts and renews the depiction of this eternal subject. Photographed by Brassaï in the Boisgeloup studio in December 1932, the sculpture was not reproduced in the number of *Minotaure *published a few months later, nor in the special ‘Picasso: 1930–1935’ number of Cahiers d’art published in 1936, notwithstanding the fact that this is rich in works from Boisgeloup. A bronze version of Reclining Bather was revealed to the public in the catalogue of sculptures that Daniel-Henry Kahnweiler published in 1949 with Éditions du Chêne: facing two standing Bathers, robust and masculine-looking, she is bursting with melodic sensuality.